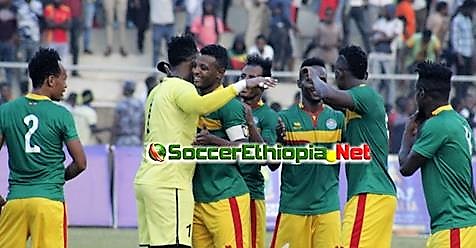 The Ethiopian National Team revived their hope of progressing to the AFCON 2019 tournament that will take place in Cameroon as they secured a 1-0 win over Sierra Leone in Hawassa.

Getaneh Kebede converted from the penalty spot in the 34th minute after Ahmed Reshid was fouled. The Waliyas dominated proceedings and had plenty of chances to extend their lead, but were unable to make them count.

After the game coach Abraham Mebratu said that he was happy with the performance of his players.

“The team has improved in both the attacking and defending departments. The only thing that still needs improvement is our finishing.”

Ahmed Reshid said that he was happy with the win and that he tried to give his very best for the National Team while Benyam Belay underlined the fact that the team will keep on fighting to qualify for AFCON 2019. He also said that the result was a perfect holiday gift for the fans ahead of the Ethiopian New Year which will be celebrated on September 11.

Following the win The Waliyas are tied on 3 points with the rest of the Group F sides after two Match Days. A double header against neighbors Kenya in October will be the next assignment for Abraham Mebratu’s troops.