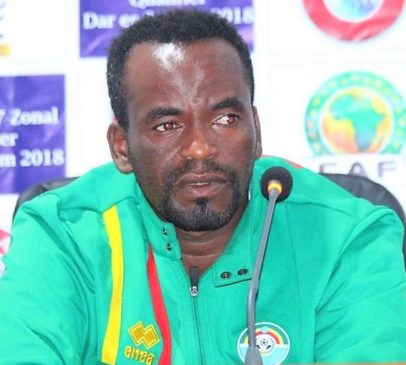 Born in Hawassa city, capital of the Southern Regional State, Temesgen Dana, 36, started playing football at a project level. Passing through the U-11, 13, and 15, he managed to join the Eastern football team. During his time with the club, he was recruited to play for the Hawassa U-17 team until he retired from playing at the age of 22 due to a shoulder injury. Afterwards, he went to school and graduated in agriculture from a college at Wolaita Sodo. Not being able to satisfy his longstanding love of football, he began coaching in various regional championships. Now, Temesgen has become well-known in coaching youth teams and winning trophies. He became an assistant coach for the U-17 Hawassa team and later became the head coach. After his appointment as the U-17 national team coach by the Ethiopian Football Federation (EFF), the team managed to progress to the final of CECAFA U-17 tournament in 2018 held in Tanzania. The national team only recorded a loss of 3-1 to the Ugandan national team.  Dawit Tolesa of The Reporter sat down with Temesgen Dana to talk about his coaching journey and the CECAFA U-17 tournament. Excerpts:

The Reporter: Tell us about the coaching lessons you have taken so far?
Temesgen Dana: Well, I have received various coaching lessons in different football coaching courses. Indeed, I received my sport diploma in 2008 and CAF B license. I have taken various short courses from German based coaches while they were here in Hawassa and I was the translator for them. The local coaches helped me achieve my dream to be a coach. So, I always try to be a good coach in order to share my experience for our football.  I am not saying confidently, I am good enough. I have to work hard and increase my coaching abilities assisted by professional lessons. So, I am trying to be a good coach day by day reading, taking lessons and watching the current styles of coaching implemented across the world.

How do you explain being a coach in Ethiopia and the challenges?

It is certainly known that every profession has its own different challenges. However, these challenges will be easy if you are passionate and have a dream. It is my dream to be a great coach; hence, all these challenges were an input for my coaching journey. There are different challenges while you tutor youth, adults and the national team. Being a coach in Ethiopia or in general is a test by itself. However, our
coaching lessons are not up to par when compared with the current standards set. We do not have any coaching schools, colleges and universities. I think nobody gives due attention to coaching lessons and almost all Ethiopian coaches have reached these levels by their own volition.