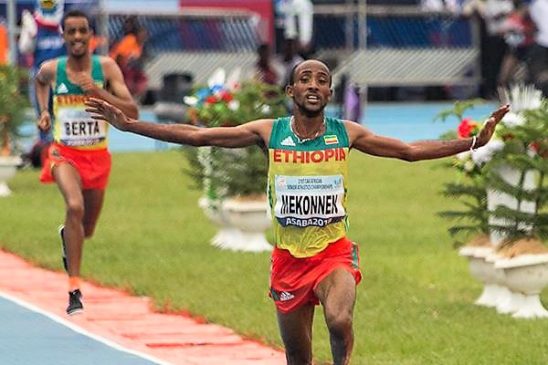 Kicking away from a lead group of four with just over half a lap to go, Jemal Yimer Mekkonen of Ethiopia cruised to victory in the 10,000m at the 21st edition of the African Athletics Championships which began today in Asaba, Nigeria.

Yimer bided his time in the early stages before finally making his decisive move on the final lap to cross the line, arms held wide, in 29:08.01.

“This wasn’t easy,” said Yimer, who was fourth at these championships two years ago and fifth over the distance at the World Championships last year. “There was a lot of competition from my teammates and the humidity made it difficult.”

The 21-year-old has kept busier on the roads this year than on the track, finishing a strong fourth at the IAAF World Half Marathon Championships in March and improving his lifetime best over that distance to 59:00 in February. But he’s hasn’t fully put his track ambitions behind him, finishing third in the 10,000m at his national championships in April.