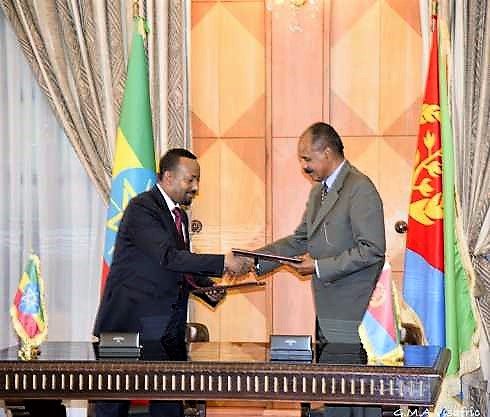 Ethiopia and Eritrea have signed a Joint Declaration of Peace and Friendship today.

The agreement, which specifies five pillars, was signed this morning at State House by Prime Minister Dr Abiy Ahmed of Ethiopia and President Isaias Afwerki of Eritrea.

i) State of war that existed between the two countries has come to an end. A new era of peace and friendship has been ushered;

iv) Border decision will be implemented;

v) Both countries will work together to guarantee regional peace, development and cooperation

President Isaias on his part said, “the tumultuous welcome accorded to Prime Minister Dr Abiy in Asmara underscores how much the people of Eritrea cherish peace.”