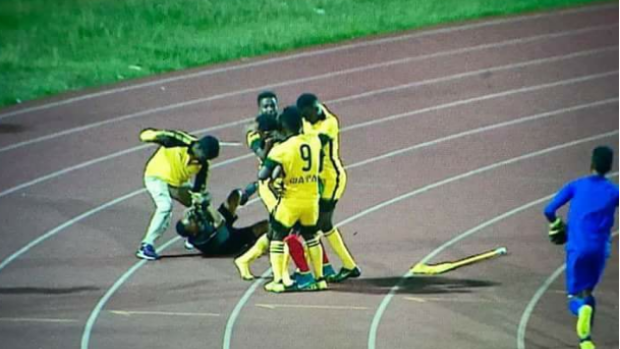 Most readers have read about or have viewed the video of a disgraceful event which took place at what should have been a happy gathering of thousands of Ethiopians at a sporting event.  I am referring to the ending of a match between two Ethiopian football teams in the city of Addis Ababa which has now gone viral.

It was triggered by a goal scored by the host team Defense against the visitors Adigrat University.  For reasons that were never made clear in any of the reporting or video, Adigrat felt the goal should not be allowed.  To lodge its complaint, most of the members of the Adigrat team run to the referee.  But the referee apparently has a better sense of what is coming and retreated to the edge of the pitch, at which point the remaining Adigrat players on the pitch and others, including coaches from the sidelines, pursued the referee menacingly.  And once they caught up with him, they gave him a terrible beating, with one of the team’s coaches taking the lead in punching him into submission.

No one from the Adigrat or the Defense teams tried to break up the menacing mob descending on the poor man whose only fault was just doing his job to the best of his ability.  The police who were on duty throughout the stadium took their sweet time but eventually came to the rescue of the referee along with the side judges working the game.

I am not writing to catch you up with the news.  This story was covered more than any other recent Ethiopian news item and I suspect that most who read this piece have seen the coverage.  I am writing because I know that what transpired in that stadium and what followed from officialdom in Addis and Adigrat is emblematic of what has gone wrong in modern day Ethiopia.  The feeling of impunity exhibited by the players and coaches of Adigrat, the absence of an appropriate security plan and the unwillingness of the football federation to hold the players, the coaches and its members accountable for their actions when things go well and things fall apart all point to the entrenched problems in sports and in Ethiopian life at large.  I believe that this episode holds the potential for Ethiopian football to finally come to grips with how it has become the shame of a nation when it had the chance to be an organization which could bring all one hundred million of us together, proud that we can develop and stage first class teams which can make us proud even in loss.