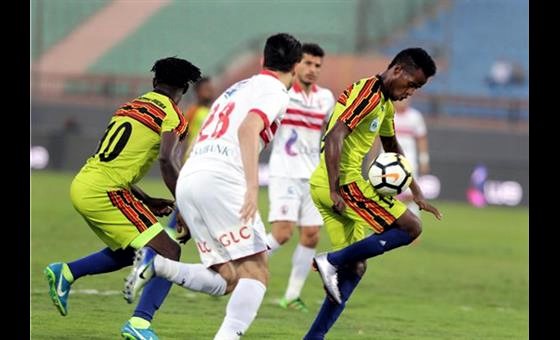 Ethiopian debutants Wolaitta Dicha produced one of CAF competitions biggest shocks when they eliminated Egyptian giants and five times African champions Zamalek from the first round, beating them 4-3 on penalties at El Salam stadium in Cairo on Sunday.

Regular time ended with Zamalek winning 2-1, reversing their identical score defeat last week in Hawassa. Ahmed Madbouly scored from the spot just before the break, and completed his personal brace four minutes into the second half, only for Abdulsamad Ali Usman to score a vital away goal for the visitors after 52 minutes.

It was the first time for an Ethiopian side to knock Zamalek from a CAF competition, as the White Knights poor recent continental record continued. Zamalek haven’t tasted continental glory since 15 years when they won the 2003 CAF Super Cup.

After losing the first leg 2-1 a fortnight ago in Hawassa, Zamalek seemed confident of overturning the resukt and qualifying to the next round in style. Ehab Galal side started the game on attacking note. Abdel Aziz fired Zamalek first shot after 8 minutes but Geremew Babsa parried it easily, before Mohamed Antar’s shot missed the target four minutes later.

Bassem Morsy should have given Zamalek the lead after 33 minutes when he rounded his marker and fired a shot that missed its target by a whisker.

Zamalek finally broke the deadlock just before halftime. Hazem Emam’s cross was handed by one of the visitor’s defenders inside the vital area, and Madbouly made no mistake from the spot to put the White Knights ahead as both sides went into the break.

Three minutes after the restart were enough for Madbouly to double his tally. The talented winger weaved through two defenders to send a curling shot into the net.

And while Zamalek thought it was going to be a goal festive, Abdulsamad Ali reduced the deficit after 52 minutes, when he headed home after Zamalek’s goalkeeper Ahmed Elshennawy failed to hold a cross from Tafesse Kumma’s freekick.

Morsy was the one to blame again when he shot high after 56 minutes. With time passing Zamalek players looked nervous as they tried to score a vital third goal. Ghanaian Nana Poku shot directly at Babsa, before substitute Ayman Hefny’s shot caused no trouble to the visitors’ goalkeeper.

The 90 minutes ended with aggregate score tied at 3-3, and it was to be decided by penalty shootout that smiled for the Ethiopian surprise pack. Debutants Wolaitta Dicha will wait for a relegated side from the premier club competition, while Zamalek were sent packing in one of the second tier club competition’s biggest shocks.