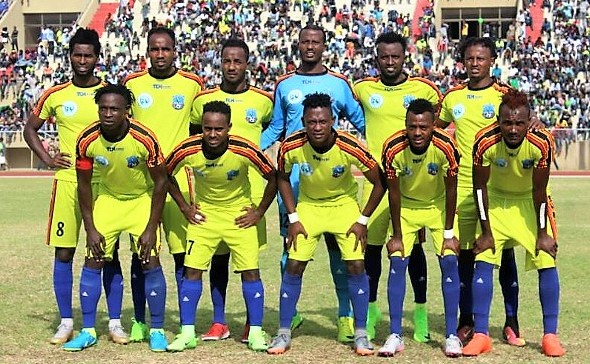 Ethiopian side Wolaitta Dicha suffered throughout the 90 minutes but emerged victorious over Zanzibar outfit Zimamoto on Wednesday in Hawassa.

Dicha brushed aside Zimamoto 1-0 in the return leg to secure a round of 16 duel against Egyptian giants Zamalek. Togolese import Arafat Djako’s first half strike was enough to hand Dicha a 2-1 aggregate win.

Nonetheless, Zimamoto were the better side of the two the whole 90 minutes. The visitors should have gone two goals up in a space of six minutes but were let down by their poor attacking proficiency. Seven minutes into the game Hakim Khamis Ali rattled the post from Nyange Othman Denge’s inch perfect cross. In the 13th minute, Denge was the culprit for spurring a glorious chance from two meters out. Hassan Haji Ali’s cut back found Denge but the striker unbelievably sent the ball over the bar.

The home side drove forward following Zimamoto’s scary start and almost broke the deadlock in the 18th minute through Dagim Bekele who fired into the safe hands of goalie Nassor Mrisho.

Three minutes before the half hour mark Zimamoto’s right back Yussuf Ramadan handled the ball inside the area as the homers rewarded with a penalty. Djako made no mistake when he successfully converted the spot kick by sending Mrisho the wrong way for the goal that will separate the two sides.

Zimamoto finished off the first half strongly with a dominant display but failed to create scoring opportunities.

Upon resumption, Dicha piled on the pressure when they tested Mrisho on three different occasions. Mrisho saved from a Bezabeh Meleyo low drive before he denied Bekele in a one –on-one situation in the 52nd minute. The homers declined on their dominance as the away side took over from where they left it. However, opportunities were limited as ‘The Bees of Tona’ went on to protect their slander lead.

We played well in the first half. We couldn’t penetrate the opposition’s goal but we had much possession in the first interval. In the second half, we kept our cool but yet again performed poorly. The excitement and pressure from the crowd coupled with my boys’ nervousness to hold on to their lead made us to sit back and defend. I told my boys to play offensive and score more goals but they were doing the opposite.

They (Wolaitta Dicha) won the match but they never had a single chance in the whole 90 minutes as they scored the winner through a penalty. I think we were unlucky today. We squandered two clear cut chances in the first 45 minutes. In the second half, we failed to create chances as my players were so tired. If you are tired and don’t have a good skill you are openly hopeless. The second half was hopeless in a take because the technique was lost.