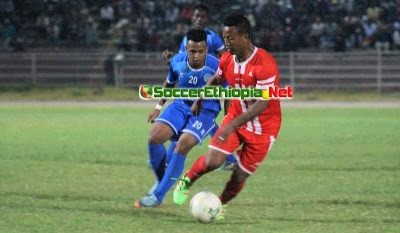 Jimma took the lead through Temesgen Gebrekidane as he fired past Clement Azonto after being set up by Yonas Geremew four minutes following the onset. Yonas, Temesgen and Samson Kolcha persisted on leading Aba Jifar’s onslaught and as expected they doubled the advantage in the 17th minute. Former Ethiopia Bunna and Dire Dawa Ketema midfielder Yonas unleashed a powerful low drive from 19 meters out to give the South Western Ethiopian outfit a deserved two goals cushion. The homers misery carried on when team captain and top goal scorer Getaneh Kebede received his marching order for an elbow on ex Dedebit man Henok Esayas in the 21stminute leaving coach Nigusse Desta in predicament.

After the resumption Aba Jifar opted to defend their lead while Dedebit knocked the doors of the opposition’s backline. Long balls from Ghanaian defender Kweke Ando caused havoc to Aba Jifar defenders and two minutes after the hour mark Henok Adugna was penalized and eventually sent off for a handball inside the area. Second half substitute Ephrem Ashamo successfully converted the resulting spot kick to pull one back for the home side. Ephrem and Abel Yalew went very close to level matters for the hosts but it was futile while Jimma Aba Jifar could have extended their lead through some swift counter attacks in which they squandered.

Dedebit still tops the league with 25 points whilst Jimma Aba Jifar jumped to second with 21 points.