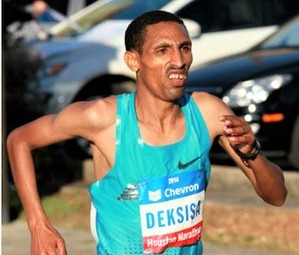 Ethiopia’s Solomon Deksisa leads a strong men’s field for the Tata Mumbai Marathon, while Bornes Kitur will defend her title at the IAAF Silver Label road race on Sunday (21).

Deksisa, whose best of 2:06:22 is more than two minutes quicker than the course record, is the fastest man in the field. The 23-year-old ran that time when finishing second at the 2016 Rotterdam Marathon and after a third-place finish at the Toronto Marathon last October, he will be bidding for his first marathon victory in Mumbai.

The Indian all-comers’ record of 2:08:35, set by Gideon Kipketer at the 2016 edition of this race, could even be under threat.

“I’m in very good shape and I think I can run as fast as 2:06,” said Deksisa at the pre-race press conference. “A course record is possible, but I also want a personal best.”

Ethiopia’s Chele Dechasa and Abraham Girma, and Bahrain’s Shumi Dechasa (Ethiopian-born), the latter running for his country in the last two IAAF World Championships marathons, are the three other men who have run faster than 2:07:00 in their careers. But a younger Ethiopian runner could perhaps be the man to spring a surprise on his faster rivals.

Aychew Bantie, 23, has few international credentials but clocked 2:09:40 in his one and only marathon to date, a high-quality affair in Amsterdam last October, and will have learnt a lot from that experience.