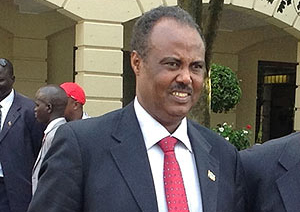 On 13 January five men vie to become the next president of the Ethiopian Football Federation (EFF).

Despite its place as one of the founding members of the Confederation of African Football (Caf) and former Africa Cup of Nations winners Ethiopian football has struggled in recent years.

The elections, which will also see a new executive voted in, had been due to take place on 10 November but were postponed in order for the candidates to be properly vetted.

Basha says if he gets another term as president he wants to help clubs establish their own league and allow the EFF to concentrate on other matters.

“I promise to help clubs form their own league while EFF should focus on development of football,” he told BBC Sport.

“[Our focus will be on] Grassroots projects in regional states and schools, developing our human resource capacity and forging good alliances in the international arena.”

“Since I became president, clubs have been established across the country so now football is not only being played in Addis Ababa but across all the states.

“I worked on age cheating, grassroots projects, marketing and we also successfully hosted the historical Caf General Assembly in March 2017.”