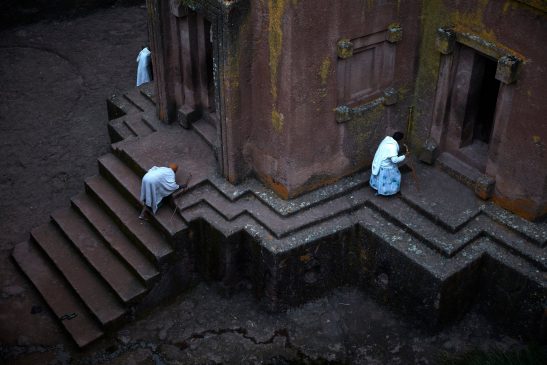 The man, carrying a basket dripping with blood and slick with fresh entrails, was yelling. The sun had set, and in the empty dirt lot north of the old town of Harar, Ethiopia, where a dozen or so people had gathered, the only light came from yellowish headlamps of an old SUV. The man repeated a high-pitched shriek that lasted a good four or five seconds, something between a mournful wail and a yodel. After a minute of silence, we heard light, quick footsteps. I saw a sullen, hunched-over silhouette, then a pair of glowing eyes. Then two pairs. Hyenas.

They were intimidating — bigger than I expected, with thick necks and huge jaws. And they were just one of the many compelling things I encountered during my continued exploration of Ethiopia. Having spent several days in the capital, Addis Ababa, I turned my attention to the cities of Lalibela, with its astounding group of rock-hewed churches dating to the reign of King Lalibela (around 1181 to 1221 A.D.), and Harar, east of Addis Ababa, the epicenter of Muslim culture in Ethiopia. These trips reinforced my opinion that Ethiopia is one of the more exciting places in the world to visit right now: an attractive mix of ancient tradition and rapid modernization. What’s more, it can all be seen fairly economically.

Preparing for an Ethiopian adventure requires planning and a certain amount of patience — and, in my case, the use of a handy loophole to deal with the sky-high airfares some visitors to Africa face. Flying to Africa from the United States isn’t cheap, and flying within Africa isn’t much cheaper. Visitors to Ethiopia who enter the country on Ethiopian Airlines, however, can take advantage of vastly discounted flights within the country.