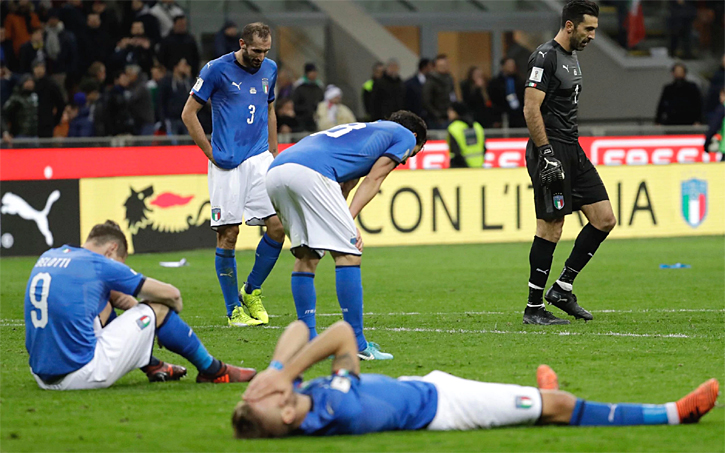 Italy failed to qualify for the World Cup for the first time in 60 years after being held to a 0-0 home draw on Monday by a defiant Sweden, who booked a place at next year’s finals in Russia with a 1-0 aggregate win.

Sweden survived waves of attacks in the second leg of their European playoff on a night of unremitting tension and drama at a stunned San Siro where the cheers turned to boos after four-timnes champions Italy were left to rue their spurned chances.

The Italians, who had not missed the World Cup since the 1958 finals in Sweden, had 75 percent of possession, squandered numerous opportunities and had penalty appeals turned down in their increasingly desperate search for an equaliser.

The Italy players, who along with their 69-year-old coach Gian Piero Ventura, are likely to face long inquests, collapsed onto the pitch in despair at the final whistle and even veterans such as Giorgio Chiellini were inconsolable.

The defeat brought the curtain down on the remarkable international career of 39-year-old goalkeeper Gianluigi Buffon, who was making his 175th appearance for his country.

Sweden coach Jan Andersson admitted that his side had to cling on against technically superior opponents.

“We had no weapons left. We just had to sit there and hope that we could hang on,” he said. “We ccouldn’t do it in any other way, they are so skilful.”

Ventura, under fire for his team selections and tactics, made four changes to the team which lost the first leg and brought Jorginho into midfield for the suspended Marco Verratti.

It was a huge ask of the Brazilian-born player who had not previously played a competitive game for Italy.

Nervous and jittery, Italy struggled to find their feet in a desperately scrappy opening 20 minutes, but began to create chances down the wings with Matteo Darmian and Antonio Candreva.

Candreva had the first real chance when Immobile cut the ball back across the face of goal but he fired over.

The chances began to flow as Jorginho chipped the ball over the Sweden defence to release Ciro Immobile whose shot was partially stopped by Olsen and cleared away by Victor Lindelof as it was about to trickle over the line.

Andreas Granqvist made a superb tackle on Manolo Gabbiadini as he looked set to score and Olsen then denied Alessandro Florenzi after he tricked his way past Mikael Lustig.

Italy kept pressing after halftime but their attacks became more desperate as the game went on and the realisation that they were heading for failure clearly weighed on their shoulders.

The Italians did not enter the first World Cup in 1930 but apart from the 1958 finals they have been ever-present.