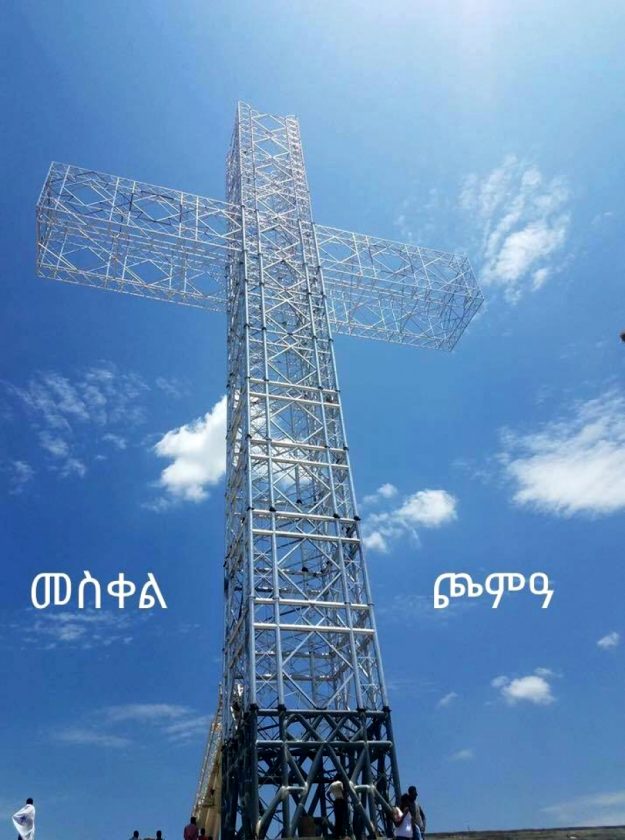 A 52 meter high and 29 meter wide giant metal cross was erected this week at the historical place Chom’a Hill top in Mekelle town,Tigary .The cross is the highest in Africa .In terms of tallness it is the 8th in the world.

The newly erected cross exceeds last year’s one erected in Adigrat which is 22m high and 12m wide.

The cross was installed by Winner Industrial Engineering workers supported with crane and generators.

According to Ashenafi the giant cross erected at the peak of Chom’a hill has 12 legs intended to commemorate the 12 disciples of Jesus Christ. The height commemorates Saint Yared’s 52 weeks of prayer and also the 52 weeks in a year.

Chom’a is a historical place where part of the true cross that Jesus Christ was crucified on had stayed for 2 months while traveling to Geshen Mariam where it is currently placed . Till now Chom’a has been a center of Demera celebration in which at the eve of Meskel thousands of believers climb the hill holding a burning fire sticks through the zigzag road which creates a zigzag glow seen form the city.

According to sources an official inauguration by the pope is expected to be held today.