The past year witnessed the loss of prominent Ethiopian visionaries, artists and athletes. They have left a significant impact on the country and its youth as a whole. Their works and contributions have inspired many in the past and will continue to inspire the future generations. The nation has been grieving the loss of artists such as Tesfaye Sahlu, Solomon Lulu and recently, visionaries like Wolday Amha. ABEL WABELLA, FORTUNE STAFF WRITER, takes a glance at their lives and achievements to commemorate them. 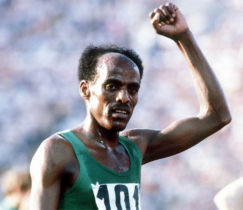 An Olympic medalist Athlete, Miruts Yifter was born in Adigrat, in the Tigray Regional State of Ethiopia. In the earlier part of his adolescence Miruts worked in different factories and as a carriage driver. His running ability was exposed when he joined Ethiopian Air Force.

He showed off his talented legs to the world in 1971 when he ran in the first United States-Pan Africa Meet, in North Carolina, US. Then, he appeared in Munich 1972 and won a bronze medal in 10,000m long distance race, though he failed to appear in the 5,000m race. He was arrested for months because the authorities at the time took it as a sign of malingering. Fortunately, he had the privilege  to continue his training in prison.

When he was preparing for Montreal Olympics 1976, he learnt that Ethiopia had boycotted the game because of International Olympic Committee’s failure to ban pro-apartheid New Zealand, the Olympic team at that time.

During Moscow Olympics, he won double gold medals in a style the world had never seen before. His tactic of accelerating in the final laps of the race was the reason behind his widely known name, Yifter the Shifter. He was part of the gold-medal-winning team at the 1982 and 1983 International Cross-Country Championships.

Later in the 1990s, He was removed from national team coaching job, fled to Canada and claimed security forces physically abused him.  He engaged in athletic coaching in his exile life. Miruts died at the age of 72 due to respiratory ailments. Miruts had seven children, most of whom live outside Ethiopia.