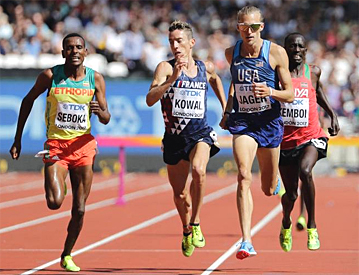 Team Ethiopia could only muster a silver medal in the men’s marathon on day three, but on this same day a host of Ethiopian athletes have moved into medal contention in both the men’s 3000m steeplechase and the men’s 800m races.

Mohammed Aman reached his first major international 800m final since 2013 which is the when he became world champion, also qualifying for a final were the trio of Getnet Wale, Tafese Seboka and Tesfaye Diriba, who advanced to the final of the 3000m steeplechase on Tuesday after finishing within the automatic qualifier spots or with the fastest losing times in their respective heats today.

Ethiopia has never set the standard in steeplechase competitions the way they have traditionally done in the longer distances. For all the hype of their storied dominance in long distance running, Ethiopian men have a paltry return in the 3,000m steeplechase of just a single medal at both world championships and Olympic games combined. Eshetu Tura won the steeplechase bronze medal at the 1980 Olympics in Moscow, a day before the legendary Miruts Yifter collected the gold in the men’s 10,000m at the same Games. At London 2017, the Ethiopians have set out to break a steeplechasing medal drought that spans some thirty seven years. They certainly weren’t favoured ahead of these games and frankly, still aren’t. The trio have little in terms of honours and international experience, with Getnet Wale being seventeen and Tesfaye Diriba only eighteen. 23 year old Tesfaye Seboka is Ethiopia’s national champion, which as I explained above, doesn’t rank very high on the prestige meter. Prior to the games, all the talk was about who wouldn’t be joining the trio. Chala Beyo, the defending African champion, was controversially cut from the team and made headlines after physically attacking his coach and going missing amidst reports he was wanted on assault charges. The two have since made amends and the situation has been sorted out.

Nevertheless, the diminutive Getnet Wale put up a very decent performance to keep up with the taller and longer strided athletes such as Soufiane Elbakkali of Morroco and European champion Mahiedine Mekhissi of France. Getnet spent the entirety of the race among the top three leaders. On the final lap, Getnet had difficulty maneuvering past one of the hurdles and temporarily stalled, but he recovered to beat off the advances of Kenya’s Jairus Birech and Algeria’s Bilal Tabti to finish in third, an automatic qualifying position.

In the second heat, Tafese Seboka, who ran at the Rio Olympics last year but was disqualified from his semifinal for stepping outside the track, required what looked like a jolt of adrenaline at the end of the race to finish in second place. In a race that featured 35 year old Ezekiel Kemboi, the Kenyan double Olympic champion and four time world champion, Tafese ran with a similar strategy of remaining atop the pack for much of the race. He was struggling in fourth by the final lap and the leading duo of American Evan Jager and Frenchman Yoann Kowal seemed beyond their grasp at that point. It appeared that Tafese’s best hope would be in defeating the decorated Kenyan Kemboi who was ahead of him in third. By the final water jump, a ten meter gap had developed as the battling Tafese and Kemboi appeared out of reach of the leading Kowal and Jager. But after the final hurdle, Tafese managed to sprint the final thirty or forty meters at a frenetic pace that caught everyone off guard, including the leaders. He closed the gap and managed to beat the complacent Yoann Kowal into second place. Jager won the race. Kemboi, who struggled would finish among the best losers to reach the final.

The third heat was less clear cut for the Ethiopian runner involved. Tesfaye Diriba trailed most of the runners at the back for much of the race. He emerged among the front runners with a couple of laps to go and managed a forth place finish behind Kipruto of Kenya, Kenyan born American Kebenei and Canadian Matthew Hughes. His time was good enough to reach the final, meaning a contingent of three Ethiopians will take on a contingent of three Kenyans among others in Tuesday’s final. The three are youngsters with years of development and improvement ahead of them. The fact that they have managed to offer themselves as outside bets for world championship medals at this early stage of their careers means that the future for Ethiopian steeplechase hopes does look bright.

In the 800m semifinals meanwhile, Mohammed Aman was hoping to run a convincing semifinal race after his elimination scare in the previous round yesterday. In yesterday’s race, a very poor start to the race forced him to give everything he had towards the end with barely a hundred meters to go and only just survive to qualify for the semis. This time around he put himself in a decent position from the get go and didn’t have to labour at the start. The tight race saw Mohammed shift into second place giving himself a serious chance of winning due to his efficiency with the finishing kick. However with a lap to go, Mohammed despite running steady and among the leaders, saw himself crowded into the inner track by the other runners with his path blocked. Luckily for him an opening appeared at the last bend, and he used it to glide past Frenchman Pierre Ambroise Bosse and into second place which is where he finished. Kenya’s Kipyegon Bett won, taking the automatic finalist slots with the Ethiopian, although both Bosse and even forth place finisher Thiago Andre of Brazil were fast enough to reach the final.

Mohammed Aman can now rest after two days of races as the final is in a week’s time. He showed that the quarterfinal counted for nothing with a much improved display on day two to calm fears and reach the final. The winner of his quarterfinal, American Donavan Brazier was unable to qualify. For Mohammed though, plagued by injuries and loss of form, this is already a comeback as it is. But a medal in next week’s final would be a real statement win and a silencer for his critics.