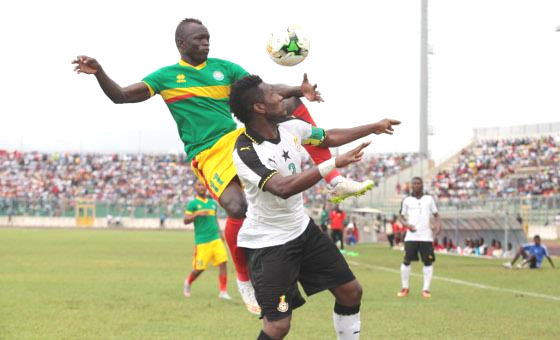 Ghana defeated Ethiopia 5-0 in their Group F opener of the 2019 Africa Cup of Nations qualifier on Sunday at the Baba Yara Stadium in Kumasi, to go top of the group.

The Black Stars chasing a win in as many matches began business early with captain Asamoah Gyan opening the scoring on ten minutes with a low header from debutant Thomas Agyepong’s cross.

Gyan’s goal, his 50th and the highest by a Ghanaian received a huge reception from the filled to capacity stadium with supporters that seemed to be at the love end of their recent love-hate relationship with the team.

Encouraged by the goal, the homers grew in confidence and attacked in droves in a bid to consolidate their lead. Their effort paid off when Andre Ayew’s effort resulted in a corner kick.

With a inswing that missed a couple of legs, defender John Boye popped forward among the forest of legs, with his back against the goal and made a magical turn to send a spectacular effort to the roof of the left corner with goalkeeper Abel Mamo completely beaten on 14 minutes.

With Ghana dominating and Ethiopia struggling to find their feet, Ebenezer Ofori scored what will easily make the headlines five minutes before the break. He picked the ball from the centre of the field, raced forward before unleashing a hefty drive to add his name to the scorers list.

Ethiopia responded with a few threats of theirs but could not make their short spell of dominance count before recces.

The Black Stars returned from the break and quickly put to bed the match with debutant Raphael Dwamena grabbing a brace in the 47th and 59th minutes respectively.

Ghana leads the pack in Group F on superior goals, tied on three points with Sierra Leone, who beat Kenya 2-1 earlier on Saturday on Freetown.