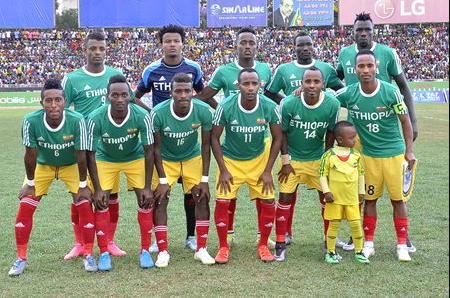 Addis Ababa – The Walias of Ethiopia will face the Uganda Cranes in a soccer friendly match tomorrow in preparation of the 2019 African Cup of Nations qualifiers (AFCON).

Although the match was initially schedule to take place at the Addis Ababa Stadium, the Ethiopian Football Federation  (EFF) was forced to change the venue to the 50,000-seat Hawassa Stadium in the southern part of the country because the torrential rain has made the field impossible to play on.

The Walia Ibex, seeking their first return to AFCON since 2013, are in group “F” of the qualifiers with Ghana, Kenya and Sierra Leone. They will open their campaign away to Ghana on June 9th.

This will be the first test match for the newly appointed Walia coach Ashenafi Bekele, who named a 29-man squad a few weeks ago made up of the domestic Ethiopian Premier League.

Shemelis Bekele and Oumed Okuri are the only foreign based players summoned in the provisional team.

Oumed, who plays for El-Entag El-Harby Sporting Club in the Egyptian topflight, has enjoyed a successful season, scoring nine goals in all competitions.