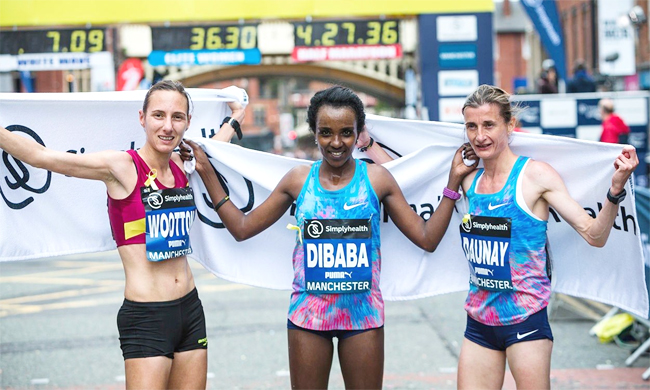 On an emotional day for the city, tens of thousands of runners were joined by huge crowds of supporters, with a minute’s silence held before both the half-marathon and 10km events to remember the 22 people killed in Monday’s bomb attack. More than 100 people were also injured in the blast at the Manchester Arena and applause for the emergency services also took place, while many participants wore yellow ribbons in tribute.

Dibaba – who previously won in Manchester in 2013, 2014 and 2016 – had Britain’s Katrina Wootton for company in the opening stages but broke clear around a mile into the race.

Never challenged, Ethiopia’s three-time Olympic champion and five-time world track gold medallist clocked 15:40 at half-way and went on to secure a more than two-minute victory, crossing the finish line in 31:03 ahead of France’s Christelle Daunay, who ran 33:08.