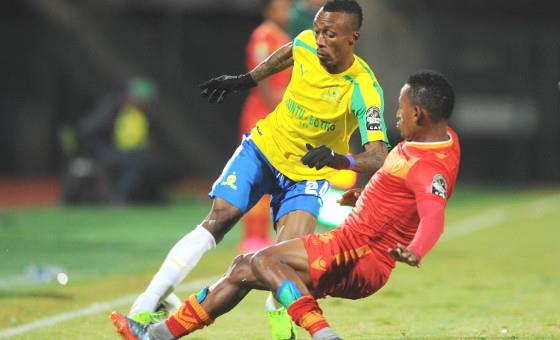 Holders Mamelodi Sundowns got their defence to a rocky start after being held to a goalless draw in their Group C opener by visiting Ethiopian side, St George at home on a bitterly cold and wet Saturday evening in Pretoria.

The African champions made a range of changes to their line up with the return of star player, Sibusiso Vilakazi, the most notable.

The Ethiopians were determined to cause an upset against their more fancied opponents, showing no respect to their host from the onset.

The homers eventually gained control of the match and almost got the opener when Zimbabwean sensation, Khama Billiat, came close to opening the scoring from close range but saw his effort being saved by goalkeeper Robert Odongkara.

Sundowns continued dictating terms in the middle of the park, with Hlompho Kekana and Lucky Mohomi pulling the strings but poor finishing coupled with the visitors solid backline denied the champions when it mattered most.

Both keepers had very little to do in the opening half with most chances either going wide of goal or being easily collected by the goal minders.

The “Brazilians” as Sundowns are fondly called, came out firing in the second half in a bid to avoid disappointment. Just after the hour mark, Liberian Anthony Laffor did well to pinpoint Sibusiso Vilakazi on the far post but the one-time Player of the Season squandered the opportunity with a poor finish.

Even though Sundowns was dominant throughout, the Ethiopians had their hosts worried on a couple of occasions with their high pressing counter attacks but could not really do much to break the homers rear.

The introduction of Percy Tau and Yannick Zakri spurred the “Brazilians” even further to push for a goal with a number of good build ups but it was just not meant to be for the South Africans on the night.

With time running out, Sundowns opted to go for the long ball with Laffor being the target. This proved to work in the Ethiopians favour who were able to deal with the approach and held on for a previous point on the road.

Tau almost stole it for the defending champions just a minute before full time after a burst of pace saw him pressing into the box before the ball was cleared off his feet just before taking a shot to keep the score at 0-0.