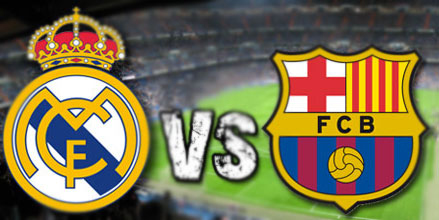 Real Madrid host Barcelona on Sunday in a hotly anticipated El Clasico that will go a long way to deciding the destiny of the La Liga title.

We look at five key battles between Spain’s two giants.

Madrid captain Ramos has often been his side’s saviour at both ends of the field this season.

He scored a stoppage time equaliser when the sides met earlier this season.

However, Suarez has often got the better of Ramos with an excellent record of four goals in the last five Clasicos.

Suarez’s form of late, though, has been poor. The Uruguayan has failed to find the net in his last four outings and Barca need him back on top form with Neymar missing out through suspension.

Busquets has been the standard bearer for nearly a decade with his reading of the game and ability to receive and distribute the ball under the most intense pressure.

Casemiro is far more combative. The Brazilian often treads a fine line by crashing into tackles, but has become a fundamental part of Madrid’s success under Zinedine Zidane over the past year.

Ronaldo is flying after scoring a hat-trick, albeit with some help from lenient linesmen, against Bayern Munich in midweek.

The Portuguese has been reserved for the big occasion this season and will be expecting to build on his 16 Clasico goals.

As Real’s arch provocateur Pique in ensured a hostile reception at the Bernabeu, but has proven adept at keeping his former Manchester United teammate in check.

Ronaldo has scored just twice from open play in his last eight games against Barca.

Marcelo was Madrid’s outstanding performer against Bayern in midweek with two goal-line clearances and a brilliant assist for Ronaldo to complete his hat-trick.

The Brazilian is in the form of his life, but his desire to constantly drive forward from left-back is a dangerous tactic with Messi drifting inside from the right of the Barca attack.

The five-time World Player of the Year hasn’t scored against Madrid in his last six outings since scoring a hat-trick at the Bernabeu in 2014.

However, he remains by far Barca’s biggest threat with 45 goals in as many games this season.

With Casemiro and Busquets providing the protection and Toni Kroos and Ivan Rakitic the dynamism in midfield, Modric and Iniesta will be tasked with providing killer passes from midfield to break down both sides’ leaky defences.

Modric has had the better season with Iniesta, at 32, having made just nine La Liga starts this season.

Yet, Iniesta still has some magic left in him and has scored two wonder goals as Barca have scored four in two of their last three visits to the Bernabeu.