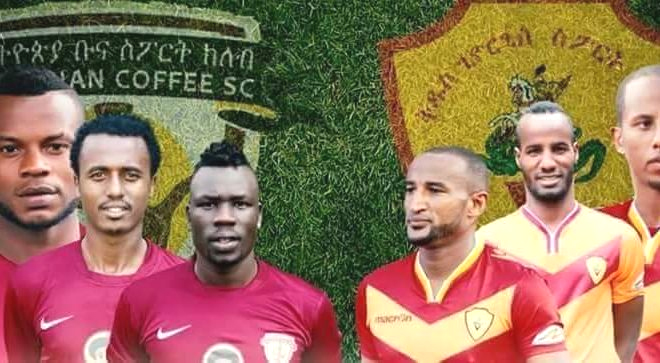 All eyes are on the eagerly awaited Sheger derby between St George and Ethiopia Coffee at the Yidnekachew Tessema Stadium on Saturday starting at 1600hrs.

St George seeking to win the one of most competitive  African national football league for the fourth time in a row hold a four-point lead over fourth-place Ethiopia Coffee with seven rounds left.

A win for the season-long pacesetters would make them firm favourites to become champions as so far they have won 18 matches.

A win for Ethiopia Coffee would narrow the gap to a single point for the team seeking a their second title.

With even more at stake than usual in a fixture dating back over half a century, it will not be a surprise that tickets for the mid-afternoon Yidnekachew Tessema stadium showdown will be sold out.

Most of the global football family will be able to watch the match either on facebook or other live streams as  the derby is  expected to attract record worldwide viewership figures.

In the first leg of the derby ,Ethiopian Coffee edged St. George 1-0 and it will be interesting to see if they will claim the bragging rights again in the biggest football rivalry in Ethiopia.

During the match Nigerian import Eko Favour struck the lone goal in the 26th minute to spark wild celebrations – led by then Coffee’s Serbian boss Vebojsa Vucicevic, who could not hide his joy.

St George’s Adane Girma,one of the best strikers in Ethiopian league will partner with  Mintesenot Adane with fit-again Samuel Sanumi in the hunt for goals while Ethiopia Coffee will have Mesoud Mohamed and Wondwossen in the battle to score goals.

One thought on “EPL: All eyes on Sheger derby over the weekend”