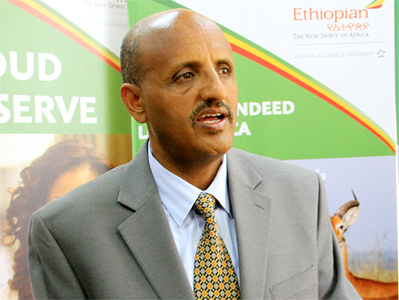 Africa’s largest airline, Ethiopian Airlines, is celebrating its 70th anniversary. The pan African airline grew steadily in the past ten years amidst a challenging business environment in the global aviation industry. News of fuel price hikes or outbreaks of war and epidemics in any part of the world wakes Tewolde Gebremariam, Ethiopian Airlines Group CEO, from his sleep in the wee hours of the morning. Tewolde typically works 14 to 15 hours a day, seven days a week. The growing competition from global mega carriers seems to be frustrating the distinguished CEO. Kaleyesus Bekele of The Reporter last week met Tewolde in his office and discussed the milestones the airline has reached and the daunting task of managing a rapidly growing airline in a turbulent environment. Excerpts:

The Reporter: As Ethiopian Airlines is celebrating its 70th anniversary, what are the major achievements?

Tewolde Gebremariam: Seventy years is a long period of time. Ethiopian has registered impressive growth over the last 70 years. I would say the last ten years have seen an exceptionally tremendous growth. The first 60 years were also very important. The first 15 or 20 years were basically formative years, when the airline was managed with the support of TWA (the now-defunct Trans World Airlines). The major milestone was reached in the early 1960s, when the airline brought the first jet service in Africa with Boeing planes 707 and 720. Coincidentally, that was the time when the Organization of African Unity (OAU) was formed. This was a historical moment for the continent when African solidarity and integration were coming together to Addis Ababa to from the OAU. At that time the airline was moving to the next stage, jet service that was then a novelty in the continent.

So it started its leadership in the continent at that time by starting jet service. The introduction of the jet was an industry game changer. The airline continued to lead in the early 1980s again, when it brought to the scene a B767, which was the most modern airplane at that time. Ethiopian was a launch customer Boeing. We were the second airline next to El Al. The B767 was a new machine with modern technology.

The flag-carrier airline was still a leader in Africa in the 1990s with its B757. In 2010, we introduced the first B777-200LR in Africa. With the introduction of the B787 Dreamliner in 2012, Ethiopia caught big media attention, as we were the second country next to Japan to take delivery of the B787.

We continued to grow last year by taking delivery of the first Airbus A350XWB. These were the major millstones. Parallel to these, the number of international destinations and passengers has been growing and the last ten years have seen the airline grow very fast. We are now six years into Vision 2025 that we launched in 2010. Many in the media and some industry analysts doubted our capacity in undertaking Vision 2025. That’s because it was very ambitious in a very challenging environment and people had their doubts internally and externally that it would be achievable.

But now six years later, that doubt is no more in people’s mind because we have already achieved a lot and even exceeded the targets for Vision 2025. Now Vision 2025 gives us the opportunity to grow. It was the right business strategy, which is tested and tried.  As a result of that we are now the largest carrier in Africa.

You must have seen the report by the International Air Transport Association (IATA) that shows that Ethiopian is the largest carrier in Africa in terms of revenue, passenger and number of aircraft. Ethiopia is not the largest economy in Africa but it has the largest airline in the continent. So that shows you the remarkable success of Vision 2025.

The growth of Ethiopian has direct and indirect impact on the socio-economic development of Ethiopia and Africa. That’s because this is an airline connecting the continent with many trading partners in North America, South America, Europe, the Middle East and Asia. We have 95 international destinations and 20 domestic destinations. We are connecting Ethiopia and Africa with the rest of the world with mostly daily nonstop flights. This has a ripple effect on economic development, trade, investment and tourism.

When it comes to cargo services, we are supporting the country’s export and import. Air connectivity is very important. It is essential and a critical driver of economic development as it has been proved in many other countries. I think the airline is doing very well.

Read full interview at: The Reporter