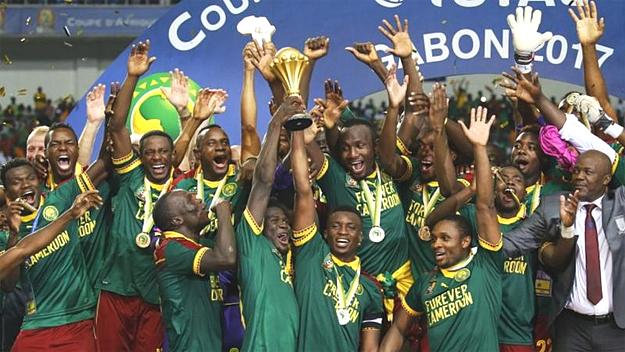 Cameroon came from behind to beat Egypt 2-1 and seal a fifth Africa Cup of Nations in a thrilling, edgy final.

Substitute Vincent Aboubakar swept in the winner two minutes from time, flicking the ball over defender Ali Gabr and thumping it home.

Nicolas Nkoulou had earlier equalised for Cameroon, rising highest to power in a header on the hour mark.

The equaliser cancelled out Mohamed Elneny‘s opener on 22 minutes with a beautifully taken near-post strike.

The wild celebrations for Aboubaker’s winner announced Cameroon’s return to the continental summit, after a wait of 15 years.

It also makes them the second most successful nation in the competition’s history – behind Egypt.

Besiktas striker Aboubaker ran towards the triumphant Cameroon fans in the Stade de l’Amitie stands in Libreville to celebrate, pursued by delirious teammates and the coaching staff.

Underdogs Cameroon had already upset the odds to reach the final and stunned the much-fancied Egyptians with the late dramatic strike, after fellow substitute Nkoulou had drawn them level.