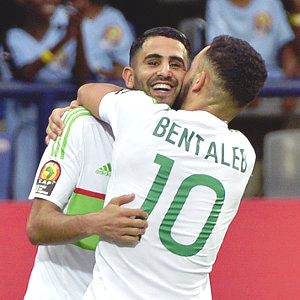 Midfielder Riyad Mahrez scored in either half as Algeria came from behind to hold Zimbabwe to a 2-2 draw in their Group B clash on Sunday in Franceville.

The England-based star scored eight minutes from time to snatch a vital point for ‘Les Fennecs’ against a determined Zimbabwean side, who have themselves to blame for failing to make the most of the encounter.

Considered underdogs in the group, the Warriors proved that they are not here to add to the numbers, and almost broke the deadlock after only 10 minutes when dangerman Khama Billiat tested the Algerian defence with his surging runs upfront.

Billiat outwitted his marker but Rais Mbolhi denied him with his feet for the first corner of the match.

Two minutes later, ‘Les Fennecs’ broke the deadlock through African Player of the Year, Mahrez, with a curling shot that left Tatenda Mkuruva with little to do. Slimani profited from a blunder by the Zimbabwe midfield, and fetched Mahrez, who fired past Mkuruva.

The Warriors responded in style and levelled five minutes later through Kudakwashe Mahachi, who struck a low shot that beat Mbolhi for a deserving equalizer.

It took five minutes for the Zimbabweans to take the lead through Nyasha Mushekwi from the spot after Mokhtar Belkhither felled his marker in the vital area.

The Southern Africans resumed on the same momentum and Billiat almost made it a two-goal lead for his side in the opening minutes, only for Mbolhi to stretch his full limit to save the goal bound effort.

On the hourmark, Amr Bensebaini was unlucky to see his header hit the crossbar from a Faouzi Ghoulam corner, as Algeria gradually took control of the game.

All was not finished for Zimbabwe and nine minutes from time, substitute Cuthbert Malajila missed a golden opportunity to take the game beyond the North Africans. With only Mbolhi to beat and with Billiat unmarked, Malajila went for goal and was denied by Mbolhi with his feet.

On 82 minutes, Mahrez made amends for his earlier misses with a shot that beat Mkuruva to earn his side a point.

Total Man of the Match

This is just the first match and first matches are always difficult in any major competition. We had a bad first half and it affected our game plan. We resumed stronger in the second half and managed to equalize. Zimbabwe was always going to be difficult. There are no small teams here. We made mistakes in the first half that allowed Zimbabwe to play. The penalty was also a huge mistake. We have one point and we will hope to have the three points in the next matches.

Getting a point against Algeria will motivate the players to do better in the next match. We sat too deep though we were catching them on the break. At this level, you have to be clinical in front of goal to win matches. It was only nine minutes to the end and they equalized. Our objective is to reach the second round and we will work towards that.