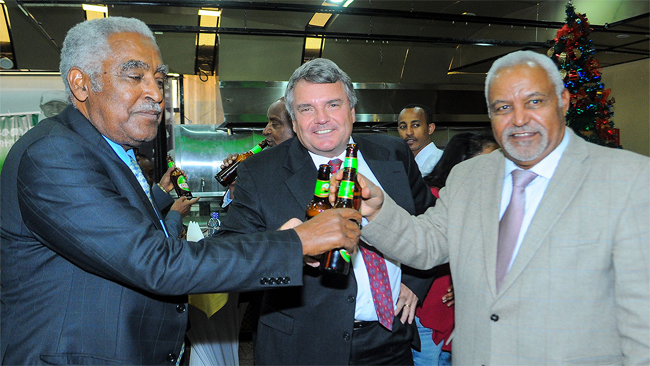 Invests 1.2 billion birr for the project

With a total investment capital of 1.2 billion birr and an initial production capacity of 350,000 hectoliters, the beer maker has launched a 330cl and a five percent alcoholic volume beer to the local market.

According to Gavin Brown, general manager of Zabidar Beer, the brewer employs a Belgian experience to brew and bottle a beer that combines malted barley, hops and water.

Located in the localities of Gubre, near to Wolkite town, 167km south west of Addis Ababa, Zabidar Beer will be available in the market with a unit price of 13 birr per bottle.

The Belgian Unibar, which holds a market threshold in the African beverage industry, holds a 60 percent majority share at Zabidar Beer. Back in 2014, after months of negotiations, Jemar Hulegeb Industry (back then Zabidar Hulegeb Industry) SC was able to partake with Unibar with a 40 percent stake. According to Raei Melesse, brand manager at Zabidar, Jemar Hulegeb SC brings together 1,100 local shareholders in which bankers, insurers, hotel owners and the like are part of. Unibra, which was established in 1960 in Belgium, has been operational in Africa holding the license for Skol brand, a Brazilian beer originating from Belgium.

The beverage industry currently seems to be saturated with a couple of global brands snatching major shares of the market in the country. However, reports suggest that the beverage market is believed to grow between 15 to 20 percent per year. BGI Ethiopia, Dashen, Heineken, Meta, Raya, Habesha and Zebidar are the seven beer companies running a total of 11 breweries in the country. Both Brown and his team told The Reporter that they have the confidence to penetrate the market with the Southern Region and the capital as primary targets. Next to BGI Ethiopia, Zebidar becomes the second brewery to be located in the Southern Regional State.

In an attempt to break Guinness World Records, the product launching involved some 1000 people, to form the largest human image of a bottled beer with simultaneous pulling off the RipCap. According to the Guinness World Record’s website, so far, the largest human image of a bottle consists of 3,128 participants, achieved by a Spanish winery, Coordinadora de Peñas de Valladolid, in Spain, on September 4, 2016. The participants were either dressed in red, black or yellow to represent a wine bottle.