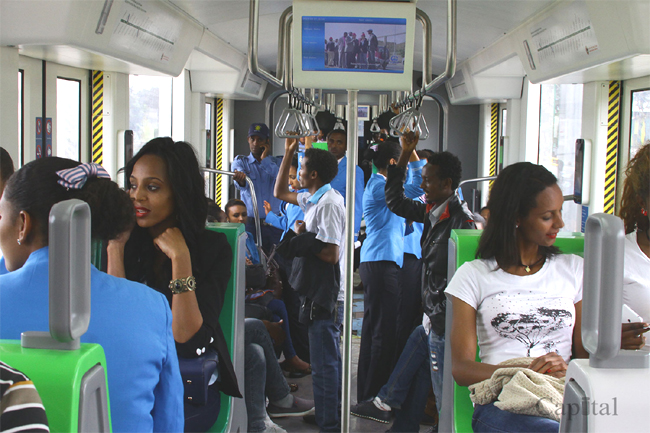 Currently the only way to verify if a customer has paid is to have a person checking the train for tickets purchased manually at ticket booths. Now the transit authority has imported 100,000 electronic cards which will allow for an E ticketing scheme.

Awoke Mulu, Public Relations Head of AA-LRT, told Capital that introducing electronic tickets is one of their new strategies they plan to gradually implement.  Currently about 120,000 dwellers in Addis Ababa use the LRT everyday and over 45 million people have ridden it since it began operating.

The AA-LRT operates under the Ethiopian Railway Corporation (ERC). “We have to try the system before we begin the electronic ticketing because the financial transactions have to be undertaken properly,” he added.

The E ticketing scheme is sophisticated so the corporation must develop the software, according to Awoke.

Awoke said that the corporation will place the electronic ticketing machines at Stadium, Abenet, Kadisco, and Lem Hotel areas.

He said that it is difficult to know for sure when the new system will commence.

The LRT system earns about 400, 000 birr in daily revenue. Tickets currently cost two, four and six birr depending on the distance of the trip.  Even though the fee is small hopes are that the system will eventually become profitable. “Ticket prices are based on a detailed study and we expect fares to remain in place for a while,” he said. One of the issues the system faces is that some board the train without purchasing a ticket. The corporation will soon add 40 ticket controllers and more will be hired in the future.

The LRT is the first in Sub Saharan Africa began operation on September 20, 2015. There are a total of 41 trains and up to 26 provide service every day.

The AA-LRT, which has received international attention has consumed close to half a billion USD. It was constructed by the Chinese state owned CREC, which manages the operation with Shenzhen Metro Group. A loan also came from the Chinese government which supported the electric railway line connecting Ethiopia to Djibouti.