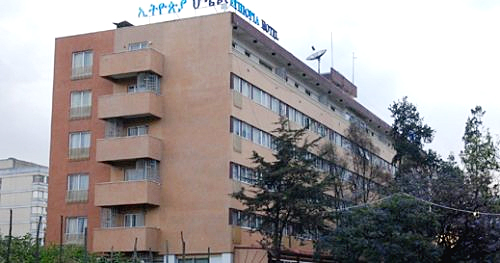 Ethiopia Hotel and the adjacent Bego Adragot building are to be torn down within the next month. Belayneh Kinde, the import export mogul, bought Ethiopia Hotel in 2010 for 92 million Br. He now has plans to tear down the three star hotel and erect a new 60 storey building.

Ethiopia Hotel was one of the earliest hotels built in Ethiopia. It was built to receive guests while Ethiopia was hosting the meetings of the Organisation of the African Unity during the reign of Emperor Haileselassie I. At that time Ethiopia Hotel, along with Ras Hotel, was the most modern hotel in the country.

The Bego Adragot building, building adjacent to Ethiopia Hotel, is also to be removed. It was one of the earliest modern buildings in Ethiopia, built more than 80 years ago, during the Italian invasion. The building, which is situated opposite the National Theatre, is an example of the architecture of a bygone era. The brick arches and the arcade of the building exhibits the craft of the Italian architects then dwelling in Addis Ababa.

Residents of the building and owners of the various bars, cafes, restaurant and a supermarket on the building have been ordered to leave the building by November 19th. The chairman of the local woreda told Fortune that the people living in the building will be given condominiums as replacements. There have been arguments as to whether Ethiopia Hotel and the Bego Adragot building are heritage buildings that should be preserved.

3 thoughts on “Iconic Ethiopia Hotel to be Demolished”