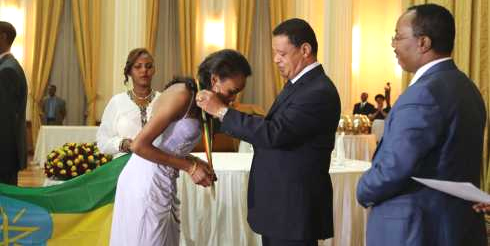 Addis Ababa, Ethiopia – At a ceremony held yesterday at the National Palace, President Mulatu Teshome gave awards to honor members of the Ethiopian delegation who took part at the 31st and 15th Rio Olympics and Rio Paralympics, respectively.

Accordingly, Almaz Ayana, who shattered the 10,000m women’s world record to earn gold for Ethiopia, was awarded a 1.5 million birr worth car and 100,000 birr worth gold insignia (medal).

Those who secured silver and bronze medals were given 500,000 and 200,000 birr reward, respectively.

The government of Ethiopia distributed a total of 6 million birr awards to members of the delegation.

Ethiopia finished 44th in the medal table at the 31st Rio Olympics after participating in cycling, swimming and athletics events.

It earned a total of 8 medals: – one gold, 2 silver and five bronze. However, the plan was to get 12 medals: – four gold, four silver and four bronze.

Ethiopia recorded the poorest result at Rio compared to its standing at the Olympics held in the past two decades.