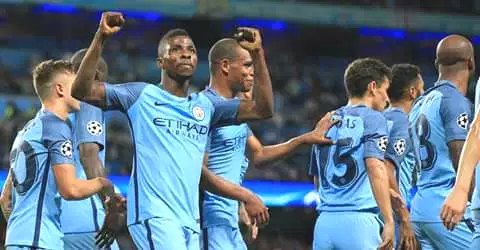 City manager Guardiola inflicted the first defeat of Mourinho’s United reign and collected his eighth win in 17 encounters with his nemesis in a pulsating encounter at Old Trafford.

Guardiola’s side took the lead in a sweet moment of revenge for Kevin De Bruyne, acrimoniously sold by Mourinho when the pair were together at Chelsea, as the Belgium midfielder punished Daley Blind’s miscue to slot past David de Gea in the 15th minute.

Kelechi Iheanacho doubled City’s lead in the 36th minute when he tapped in after a De Bruyne shot hit the post and rebounded to the Nigeria forward.

A blunder from City’s debutant goalkeeper Claudio Bravo allowed United to reduce the deficit in the 42nd minute when he dropped a cross and Zlatan Ibrahimovic pounced to lash home.

But City held firm in the second half despite more nervous moments from Bravo, whose studs-up lunge on Wayne Rooney could have drawn a penalty and a red card.

Guardiola has now masterminded four successive Premier League wins since arriving from Bayern Munich in the close-season and his team sit three points clear of third placed United and second placed Chelsea, who travel to Swansea on Sunday.

“We’re happy. These guys have a heart. In the first half we were better and won a lot of duels against a physically stronger team,” Guardiola said.

“In the second half, the long balls, you just pray because it’s almost impossible to control that.”

Mourinho added: “I had two or three players in the first half that, if I know what is going to happen, I don’t play them.

“This is football and sometimes players disappoint managers. It’s my fault because I’m the manager.”

There was plenty of drama elsewhere, including at the Emirates Stadium where Arsenal eased the pressure on Gunners boss Arsene Wenger.

Wenger, who gave debuts to Germany defender Shkodran Mustafi and Spanish forward Lucas Perez, has been questioned over his transfer dealings and Arsenal’s slow start to the season.

The critics were sharpening their knives when Arsenal fell behind in the 18th minute through a Petr Cech own goal after Dusan Tadic’s free-kick deflected off the goalkeeper.

But Arsenal equalised 11 minutes later thanks to a spectacular overhead kick from Laurent Koscielny.

And Santi Cazorla secured Arsenal’s second win of the season when the Spaniard stroked home a controversial penalty awarded for Jose Fonte’s tackle on Olivier Giroud in the 94th minute.

“It is a relief, because we missed many chances and they had one or two opportunities having thrown everything forward,” Wenger said.

“Honestly, everyone is telling me it was a penalty, but I’ve not yet seen it again.”

Tottenham swept to a 4-0 victory at bottom of the table Stoke as South Korea midfielder Son Heung-min sparkled on his first appearance of the season.

Son volleyed Tottenham in front just before halftime and netted again with a fine finish from 16 yards in the 56th minute.

Dele Alli bagged Tottenham’s third in the 59th minute and Harry Kane sealed the rout with his first goal of the season in the 70th minute.

The Hammers looked in control after Michail Antonio scored with a pair of headers in the fifth minute and 33rd minute at the London Stadium.

But Odion Ighalo netted for Watford in the 41st minute, Troy Deeney equalised in first half stoppage-time and Etienne Capoue put the visitors ahead in the 53rd minute before Jose Holebas made it four 10 minutes later.

Bournemouth striker Callum Wilson secured his side’s first win of the season as his clever backheeled finish in the 79th minute saw off West Bromwich Albion 1-0 at Dean Court.

Crystal Palace ended a three-match winless run as Christian Benteke’s first goal for the club inspired a 2-1 success at Middlesbrough.