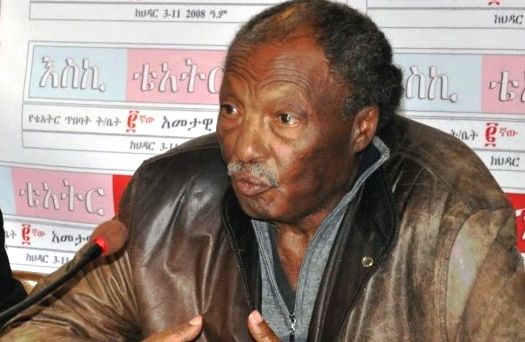 Abate Mekuria, a renowned Ethiopian director, choreographer, and producer who worked in film, television, and theatre passed away this week of prostate cancer at the age of 76. Abate was one of the few directors who made a real impact on Ethiopian theatre.

Some of his prominent works include, ‘Hahu Besidist Wor’, ‘Abugida Keyiso’, ‘Melekte Wozader’, ‘Yementa Enat’, ‘Mekdim, ‘Gamo’ and ‘Alula Aba Nega’. He gave rise to Emperor Tewodros II with his unique insight and direction. Most of the plays he directed were written by Tsegaye Gebremedhin, and are full of long speeches in a highly allusive and extremely educated manner. Abate’s talent was to transform these long speeches in a captivating presentable manner. According to the World Encyclopedia of Contemporary Theatre, Abate has a good control of crowds and his larger-than-life direction suits both Tsegaye’s plays and the vast stage. “The adaptations of Macbeth, Othello and Hamlet have endured in public memory not only for the beauty of the verse but also for the quality of the dramatic performances that they gave rise to under the direction of Abate Mekuria,” the encyclopedia read.

One of the prominent works of Mengistu Lemma, ‘Yalacha Gabcha’ (Marriage of Unequal) was also directed by Abate.

In addition to stage plays, Abate was able to experiment with outdoor spaces. One of his plays, Oedipus the King, was staged around a fountain commonly known as the kissing pool on the grounds of Addis Ababa University.