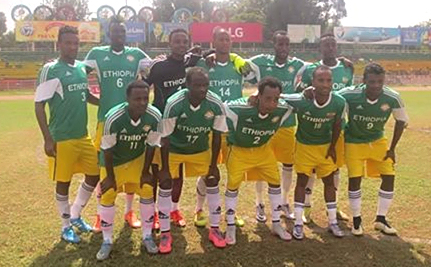 Ethiopia will be seeking for the maximum points against Lesotho away in Maseru in a Group J Day Five clash to boost their chance, in what will be the first match under new coach Gebremedhin Haile.

Haile has been in charge since May and will lead the Walia Antelopes in his first assignment against the Southern Africans.

Algeria leads the pack in Group J on 10 points, five more than Ethiopia and the former are favoured to wrap up qualification against Seychelles in Victoria on Thursday.

The Walias hopes were dealt a huge blow back in March after a 7-1 drubbing by Algeria in Blida, whilst a 3-3 draw in the return leg in Addis Ababa finally saw their quest for the group’s automatic ticket go up in flames.

With Algeria certain to go through as the winners of the group, the 1962 African champions’ only resort is by finishing in second place to be in contention for the two slots for best runner-ups.

Haile has admitted the Walias have a slim chance of reaching Gabon, but will fight till the end.

“Other teams who are currently runner-ups in their respective groups have a better point tally than us. Our only hope is to win the remaining ties and wait for the other groups’ results.

“Hence, we will deploy an attacking style of play against Lesotho. We will also be cautious in the defence too. We cannot make a miracle within a short time but we will try to content Ethiopians,” stated the former prolific striker.

The trainer has dropped five players from the provisional squad that will face Lesotho. The notable absentee is Saint George striker Salahdin, who withdrew from the squad due to a hamstring injury sustained during a build-up game against Premier League outfit Commercial Bank of Ethiopia. Samson Assefa, Addis Tesaye, Ephrem Wondesen and Mulualem Mesfin will also play no part in the Lesotho clash.

2 thoughts on “Ethiopia seek to boost chances in Maseru”