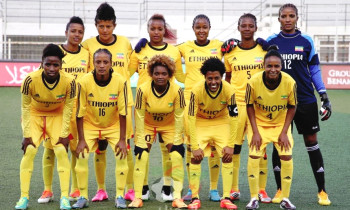 The Algerian team is to play the return match on the back of a 1-0 win after Dalila Zerrouki found the back of the net two minutes after the hour mark. Attempts made by in form Lucy striker, Loza Abera, were not successful.

The Fennecs arrived early Thursday morning and had their training at Addis Ababa Stadium. Ahead of the encounter, Coach Birhanu Gizaw said that they have the home ground advantage and will focus on attacking.

After Lucy suffered the 1-0 defeat in Algiers they started early preparations. Experienced players and young talents including striker Loza Abera, Shitaye Sisay, Erehima Zergaw and the midfielder Birtukan Gebrekirstos are expected to turn things around.

The Ethiopian Women National Team was excluded from the qualifications round of the 2016 championship due to a technical error made by the Ethiopian Football Federation (EFF). Later, Lucy was replaced by Togo Women National who opted to withdraw because of lack of finance.

The winner of Saturday match will face Kenya as the Democratic Republic of Congo withdrew from the qualifier.