Ethiopia’s national athletics team returned home after a vintage performance at the recently concluded 2016 IAAF World Indoor Championships in Portland, USA. The games, which saw over one hundred and thirty nations send elite athletes to take part in the indoor track and field meet, saw Ethiopia finish a valiant second in the medal rankings, with the Ethiopians seemingly unperturbed by reports that nine of their fellow countrymen were being investigated by the country’s doping agency.

The Portland indoor athletics meet served as priceless preparation for the showpiece event scheduled for this summer in Rio de Janeiro. While some of the globe’s crowd pleasers like Usain Bolt and Mo Farah weren’t part of the four day spectacle, it was still a golden opportunity for national athletics federations to trial their up and comers with serious competition and experiment with second string athletes hoping to crack their national Olympic squads.

Team Ethiopia arrived with a twelve athlete contingent, while still reeling from reports that a number of their athletes were under investigation for allegations for taking banned substances such as Meldonium. The entire athletics world was shocked by the news, which came hot on the heels of doping scandals in Kenya and Russia. The latter scandal resulted in Russia being temporarily banned from taking part in athletic competition by the IAAF, meaning no Russian athletes competed in Portland.

The reports created shockwaves in Ethiopian sporting circles, with the country’s athletics fans wondering how much of an affect the news would have on results. For now however, fans can breathe a sigh of relief.

Ethiopia’s seven female athletes and five male athletes competed in three events, namely the 800 metres, the 1,500 metres and the 3000 metres races. From twelve athletes, eleven of them took part in their respective final events, by either qualifying through the heats or as in the case of Genzebe Dibaba and Meseret Defar, being named to take part in the final.

Day three is when the Ethiopian athletes drew their swords, but the winner of the last two indoor 800 metre gold medals, Mohammed Aman, finished in a disappointing fourth place. The 2013 World Champion, who was considered among the best in the distance, has seen his caliber drop in recent times. 2015 was the first year since his junior career ended that he finished without winning a race all year. A controversial interference call disqualified him from defending his 2013 World title last year as he exited the 2015 World Championships in Beijing at the semi final stage. He is running out of time to find his groove ahead of the Olympics and will have to put the pedal to the metal and force himself out of his slump.

That same day, a trio of Ethiopian women were in serious contention to steal the show at the women’s 1,500 metre race. Among them, Dawit Seyaum who was running just six months after her 2015 All Africa Games gold medal performance. Axumawit Embaye, took part in the event at the 2014 World Indoor Championships in Sopot, Poland where she finished second behind Abeba Aregawi. Gudaf Tsegaye was the third athlete. Dawit Seyaum and Gudaf Tsegaye both have beautiful memories of Oregon, as it was the scene of Dawit’s gold and Gudaf’s silver medal winning performances at the 2014 World Junior Championships in Eugene just about 180 kilometres south of Portland. But this time around, despite the trio running as a unit the whole race, Ethiopian born Dutch athlete Sifan Hassan remained firm and didn’t buckle into the challenge set by Dawit, winning gold for the Netherlands. Dawit Seyaum took the silver, as Gudaf and Axumawit finished third and fourth respectively. The silver and bronze medals won by the pair were Ethiopia’s first of the games.

In the women’s 800 metre race, Habtam Alemu was Ethiopia’s sole representative in the final. The eighteen year old was part of the Ethiopian team at last year’s world championships but failed to qualify for the final. This time round she reached the final with the fourth best time ahead of her countrywoman Tigist Assefa, the 2013 African junior bronze medalist who failed to progress from her heat. In Portland, the baby faced Habtam may have been psyched out by the occasion, and finished sixth (last), in the final.

For the young Habtam, the invaluable experience of international competition will serve her Olympic aspirations. And she can also take solace that once upon a time in 2011, another inexperienced Ethiopian teenager running the 800 metre event on the big stage finished last in the final event. Mohammed Aman picked himself up from his 2011 World Championship last place finish to win the next world title and the next two indoor titles.

The Ethiopians ran rampant on the final day of competition. The men disappointed in the 1,500 metre race, as Aman Wote, silver medalist at the event in Sopot two years ago and a part of the four man Ethiopian relay team that won bronze in the 4×1,500 event in Bahamas in 2014, finished in sixth, with teammate Dawit Wolde finishing a place higher, in fifth. Dawit hasn’t been able to build on the initial promise he had shown at the start of his career.

But Ethiopia finally struck gold in the men’s 3000 metre race. The tall, lanky, Yomif Kejelcha had won a host of junior awards priod to his arrival in Portland. Like Dawit Seyaum and Gudaf Tsegaye, Yomif had also made Oregon a home away from home for himself with a 5000 metre gold medal won at Eugene’s 2014 World Junior Championships. The reigning Youth Olympic, World Youth and African junior champion, showered in accolades and the hopes of a nation, competed with Yenew Alamirew, who was a part of Ethiopia’s failed attempt to stop Mo Farah from winning 5000 metre Olympic gold in London.

Nineteen year old Yomif, who many hope could be Ethiopia’s long sought answer to Kenenisa Bekele, couldn’t impose his authority on what was a difficult race, one that Yenew ended up finishing last. But his being of imposing height, just over six foot one inch, meant that his long stride kept him out of reach of the advancing Augustine Choge of Kenya, who eventually had to settle for bronze. Yomif’s fantastic finishing kick drained the Kenyan who was overtaken at the death by American Ryan Hill.

And of course, in the one event where Ethiopia were heavy favourites to not only dominate, but to do so with flair, 2015 IAAF World female Athlete of the year Genzebe Dibaba made quick work of her opponents to easily breeze past the challenging pack to her third world indoor title. With nine laps to go, she took control of proceedings, taking the lead before creating an unassailable gap between her and the rest of the field. By the time she rounded the track and charged for the finish line, she was lapping runners and had a fifty metre lead over nearest competitor Meseret Defar. Genzebe Dibaba, at the tender age of 25, has won it all, done it all, except of course claim the biggest of all prizes, Olympic gold. Injury forced her to pull out at the London 2012 games, but in the four years since that heartbreak, she has solidified her reputation as one of the greatest athletes to have ever lived, and has stepped out of the shadows of her accomplished older sisters, Tirunesh and Ejigayehu Dibaba, both Olympic medalists. One can almost say with complete certainty that her coronation awaits her on Brazilian soil this summer. 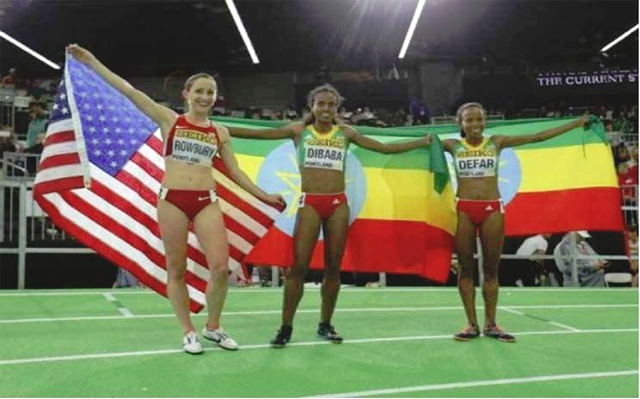 It was a great day for Meseret Defar as well. The legendary double Olympic champion’s pregnancy kept her out of competition for almost two and a half years. But the new mother is yet to display any signs of rustiness despite her age and lengthy layoff. Just a month ago she marked her return to the sport with a win in the 3000 metre event at Boston’s Grand Prix track meet. As her career winds down and there’s little more left to accomplish, she’ll be sure to be enjoying each moment, as her silver medal in Portland is the seventh world indoor medal of her career. Her first came some twelve years ago when she won gold in the same event at the 2004 World Indoor Championships in Budapest, where she led Ethiopia to a gold-silver finish ahead of Berhane Adere.

All in all, it was a satisfying show put on by Ethiopia’s indoor athletes, with room to improve for some and a rhythm needed to be kept by others. From Ethiopia’s twelve athletes who travelled to Portland, five returned with medals, an impressive tally. Also, unlike Ethiopia’s last foray into Oregon which was at the 2014 World Junior Championships in Eugene, no athletes absconded from their hotel this time round. Four members of the junior team disappeared in 2014, before resurfacing among acquaintances and applying for residency.

The host Americans finished on top of the medal standings with twenty three medals including thirteen gold medals. Ethiopia are second in the world and first in Africa, with their two gold, two silver and one bronze medal. Eleven other nations, including China, France, Canada and Jamaica have one gold medal a piece among other medals. Over a hundred and twenty other competing countries are lower down in the rankings.

Ethiopia’s athletics federation has been under fire for a while now. The dip in results produced by male athletes, the hordes of Ethiopian athletes switching allegiance to other countries, rumours of corruption and sabotage have long provoked the ire of Ethiopia’s sporting community. But the recent reports of an alleged doping scandal in a sport which Ethiopia traditionally dominates and have long been associated with, threatened to turn fans against the sport’s national governing body and created fear that a colossal collapse may be on the cards at this year’s Olympics.

Team Ethiopia headed out to Portland to quell these fears and have done a great deal in restoring some confidence into Ethiopia’s athletics program. The doping investigation is far from over, incriminating evidence and names of several athletes under surveillance are yet to be revealed. But as long as Ethiopia’s athletic elite continue putting miles into their jogging shoes and track pants across the highlands, one can be assured they will arrive ready to perform on any given day or place, whether it’s Portland or Rio.

Note: Zecharias Zelalem, who uses the pen name Zecharias Etyopia, is a Montreal (Canada)-based contributor to Ethiosports.com. He can be reached via his Facebook page.

4 thoughts on “Doping fails to taint Ethiopian swagger in Portland”