By Zecharias Zelalem for Ethiosports.com

Ethiopian national team coach Yohannes Sahle is knee deep in preparations for a home and away AFCON qualifying double header that is bearing down on the Walyas quickly. The second placed Ethiopians, who have four points out of a possible six so far, will travel to the northern Algerian city of Blida, which was the scene of their November 2014 3-1 unraveling at the hands of the Desert Foxes in 2015 AFCON qualifying action. After their first match on the 25th of March in Blida, the two sides will meet four days later in Ethiopia.

Coach Yohannes meanwhile has seen his efforts at achieving a reversal of the results earned during Mariano Barreto’s tenure nearly hit a brick wall, as injuries have claimed several players. Strikers Mulualem Tilahun and the man leading the Ethiopian Premier league scoring charts Tafesse Tesfaye have both been ruled out with injury, while captain Seyoum Tesfaye is also set to miss on the two games nursing injury. A long term injury that has seen talismanic center back Salahdin Bargecho sit out everything since the 2015 CECAFA Cup opener  is nowhere near healing. Meanwhile, Ethiopian football magazine Soccer Ethiopia have now reported that legendary Salahdin Said has ruled himself out of the squad due to his judgment that he is lacking match fitness and games under his belt after a “season he wishes he could forget.” The bad news reports keep on piling and fans are wondering whether there is anyone of noteworthy caliber able to challenge the likes of Riyad Mahrez and Yacine Brahimi.

Ethiopia has few European based professionals able to raise the ante up for the Walyas. You would expect them to cling on dearly to the few they do have in their ranks. But this doesn’t exactly seem to be the case with Ethiopian national team defender Walid Atta.

Walid Atta, five caps to his name and a wealth of European experience from over a decade of playing in Sweden, Croatia and Turkey, was a solid mainstay in Ethiopia’s defense throughout the last AFCON qualifying campaign and even played against the Algerians for the November 2014 tie. But this time round, he is not in the squad, which left many fans perplexed.

Coach Yohannes Sahle has claimed in discussions with media personnel that he has wanted to call the Östersunds FK man for the trip to Algeria, but that Walid has ignored his calls and has shown no desire to continue his international career.

But Ethiosports was able to contact Walid, who denies this and told us that he is as eager as ever to play for his country.

“I am willing to play. I am willing to travel even today, or this weekend. I haven’t ignored anyone. The national team is important to me,” Walid said emphatically.

Then why haven’t national team staff or anyone at the Ethiopian Football Federation for that matter made the necessary effort to contact Walid?

When I pressed Walid with these questions, he explains in detail what has delayed his joining the current national team camp.

The normal procedure that would see a player to join up with his national team requires that the national team federation send a letter to the player’s club in order for the club to officially release him and allow him to partake in national team duties. 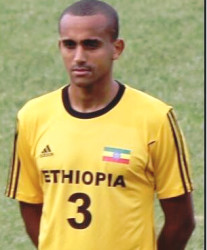 This did happen. Only one thing, the Ethiopian football federation sent a letter to the wrong club. It appears that no one at the EFF read the news that Walid currently plies his trade in Sweden’s Allsvenskan league. Instead, they sent a letter to his former club, Turkish league side Gençlerbirliği, despite widespread reports of Walid no longer playing in Turkey. This blunder served to delay Walid’s potential arrival.

“I managed to contact the federation and even coach Yohannes Sahle via email,” Walid tells me. “Our communication was great. We seemed to be on the same page.”

Walid managed to get in contact with Ethiopian football federation secretary Nardos Aberu and seemed to be making progress as she emailed Walid asking him when is planning to arrive in Addis. Walid replied to the email barely three hours later notifying her that he was ready and willing to fly out this weekend.

It has now been two days since this exchange of emails, and neither Nardos Aberu nor anyone else has replied to his queries.

Despite this, Walid remains upbeat. “I’m still ready and really want to be a part of the team. I have a great relationship with everyone in Ethiopian football. I’m waiting to be called.”

With all the injuries piling up and the lack of squad dearth that is severely affecting the current Walya setup, it is inconceivable that a European based professional like Walid Atta wouldn’t be practically begged to join in and give hope to Ethiopia’s rock at the moon AFCON aspirations.

Note: Zecharias Zelalem, who uses the pen name Zecharias Etyopia, is Montreal (Canada)-based contributor to Ethiosports.com. He can be reached via his Facebook page.