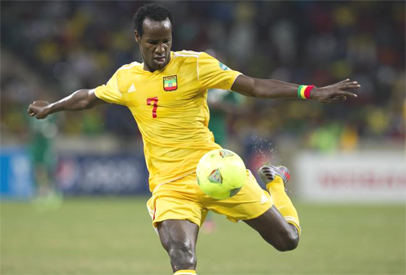 Striker Saladin Said has been recalled to the Ethiopian squad for the first time in nine months for the AFCON 2017 double-header against Algeria later this month.

The 27-year-old has joined local giants St. George after terminating his contract with Algerian side, MC Alger last January. He last featured for the Walias during the opening game of the qualifiers against Lesotho at home last June, scoring the winner in the 2-1 victory.

The experienced-forward was one of the known faces in Yohannes Sahle’s provisional 24-man squad for the double against the Fennecs announced last week. The Walias travel to Blida for the Day Three Group J clash on Friday, 25 March 2016 before hosting the return four days later in Addis Ababa.

Sahle has also summoned forward Getaneh Kebede and playmaker Shemeles Bekele in the squad dominated by members of the Walias squad that participated at the recent African Nations Championship in Rwanda, failing to go past the group stage.

Algeria sits at the summit of the group with the maximum six points from two games, two points richer than Ethiopia. Seychelles and Lesotho follow in that order with a point and no point.