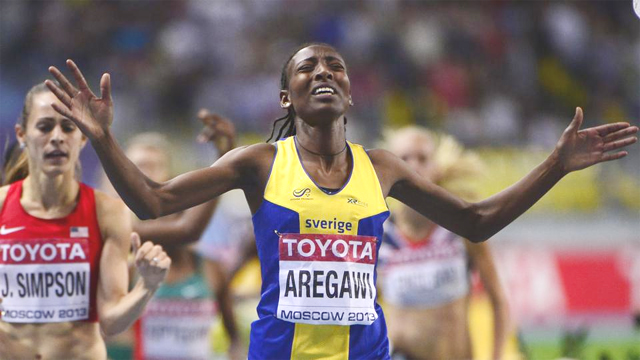 EtSweden’s Abeba Aregawi has reportedly tested positive for a banned substance and has been provisionally suspended until her B-sample is tested, Swedish Athletics announced.

“It is with dismay and with extreme disappointment we have to leave this message,” Swedish Athletics secretary general Stefan Olsson said in a statement. “We totally reject all forms of cheating, doping and illegal means. We have a zero tolerance, and this is totally unacceptable.”

The International Association of Athletics Federation issued the following statement:

“The IAAF and the Swedish Athletics Federation confirm having received a laboratory report indicating the presence of a prohibited substance in a urine sample of the athlete Abeba Aregawi collected out-of-competition by the IAAF.

Following notification of the laboratory finding, the athlete has voluntarily withdrawn from competition until the investigations into the laboratory findings are completed. In the meantime, the athlete has requested the analysis of the B sample which will be conducted shortly. The IAAF and Swedish Athletic Federation will not make any further comment until completion of the Result Management process.”

Aregawi won gold at the 2013 IAAF World Championships in Moscow, when she ran 4:02.67 in the 1,500-meter final to finish ahead of American Jenny Simpson. The victory by Aregawi denied Simpson’s second consecutive gold medal in the 1,500 meters at the world championships.