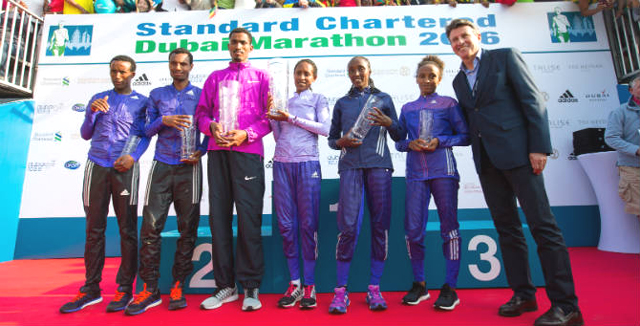 Ethiopian athletes again dominated the world’s richest distance race as Tesfaye Abera and TIrfi Tsegaye struck gold in a men and women’s 1-2-3 finish at the 2016 Standard Chartered Dubai Marathon today (January 22).In a men’s race that featured a blistering opening half marathon within world record pace, Tesfaye Abera romped home in a time of 2h:04:24 – just one second outside the course record – ahead of defending champion Lemy Berhanu (2:04:33) and 2014 winner Tsegaye Mekonnen (2:04:46).Yet again it was a race that saw the top three men all break 2:05 with Abera shattering his previous personal best by more than five minutes. It was the second fastest time in the history of the event after an opening attack by the male elites that saw the fastest ever 30km split mark (1:27:20).“My aim was just to beat my personal best,” said Abera, whose previous best time of 2:09:46 set in Mumbai would only have been good enough for eleventh place in Dubai. “To get so close to the course record is a great feeling but my main concern was to improve my best and try to win the race.”Like her compatriot, Tirfi Tsegaye also collected a cheque for $200,000 with the third fastest time in the history of the race. Winning for a second time in four years, Tsegaye took the title by more than a minute in a time of 2:19:41 from debut girl Amane Beriso (2:20:48). Third home to make it an Ethiopian whitewash of the podium place was Meselech Melkamu in 2:22:29.“Dubai is like a second home to me now – I love running here,” said Tsegaye after receiving her trophy from H.E. Mattar Al Tayer, Vice Chairman of the Dubai Sports Council, IAAF President Lord Coe, Standard Chartered Bank UAE Chief Executive Julian Wynter and Ahmed Al Kamali, President of the UAE Athletic Federation and IAAF Council Member..