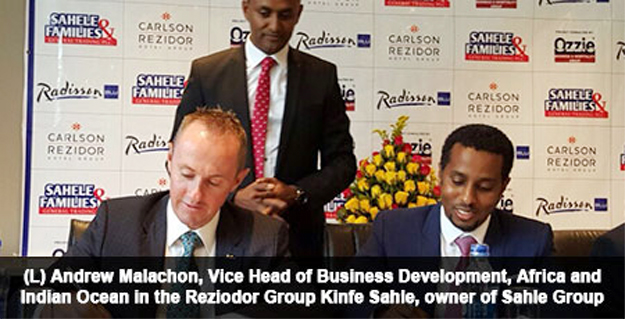 Addis Ababa – Radison Blu will open a second hotel in Ethiopia after lengthy negotiations finally succeeded with Sahle & Family Business Group, signing a management contract with Carlson Reizdor Group. Five international hotels were in the bid for Sahle’s five star hotel sitting on a 2000 meter squares of plot, located in Bole around Peacock park. Reizdor, winner of the bid, will be in charge and take exclusive and full management of the hotel, including marketing and recruitment in line with international standards.

According to the agreement signed on December 19 by Andrew Malachon, Vice Head of Business Development, Africa and Indian Ocean in the Reziodor Group, and Kinfe Sahle, owner of Sahle Group. The new building boasting 16 stories and 165 rooms and under construction for the last two years, will be named ‘Radisson Blu Plaza’ and is expected to start operation in 18 months.

The 700 million birr hotel project will create jobs for over 300 people when it goes operational. Sahle & Family Business Group, which is active in the garment sector located at Lebu area in the East-western part of Addis Ababa, fashioned the makeup of the building form the initial stage to fit for a hotel service.

Carlson Rezidor Hotel Group is one of the world’s largest hotel groups, with more than 1,370 hotels in operation and under development in over 110 countries, employing over 88,000 staff. The group’s hotel brands include Quorvus Collection, Radisson Hotels, Radisson Blu, Radisson Red, Country Inns & Suites Park Inns, and Park Plaza Hotels & Resorts.

The first Radisson Blu, found in Kazanchis recently gained five star grading by Ministry of Culture and Tourism along with Sheraton, Capital and Elilly International Hotels.