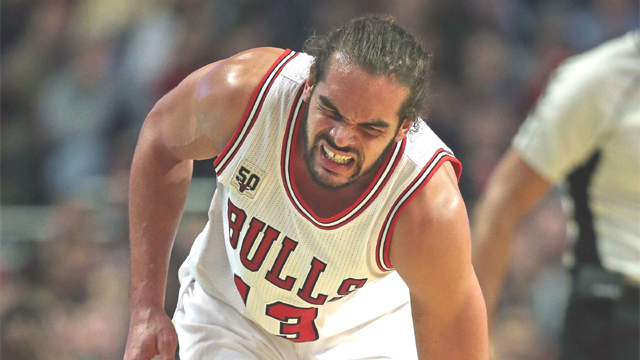 Chicago Bulls centre Joakim Noah will be sidelined for at least two weeks with a sprained left shoulder, missing at least six games, the NBA team announced on Tuesday.

Noah suffered the injury when he was tangled up with Brooklyn centre Andrea Bargnani during Chicago’s 105-102 home loss to the Nets on Monday.

said Noah will be re-evaluated in two weeks, just in time for a January 5 home game against Milwaukee if he has recovered.

Noah will miss games Friday at Oklahoma City, Saturday at Dallas, home games against Toronto, Indiana and New York and a January 3 game at Toronto.

A nine-year veteran, Noah is averaging a career-low 4.5 points a game and shooting 40.4 percent from the field this season, where he has had to adjust to a reserve role.

Noah had scored a season-best 21 points and added 10 rebounds in 29 minutes last Saturday against New York.

The Bulls have lost three games in a row and fallen to 15-11, sixth in the Eastern Conference and third in the Central division.