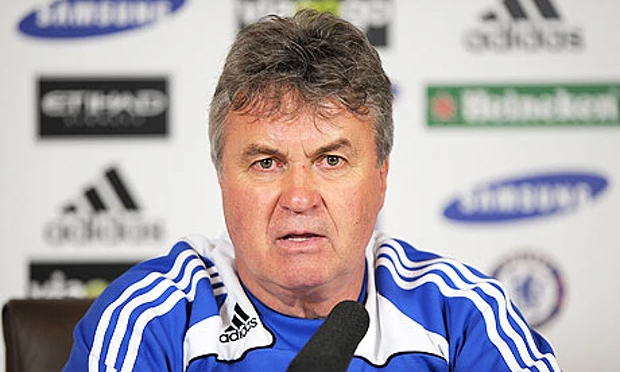 Chelsea Football Club can confirm Guus Hiddink has been appointed first-team manager until the end of the season.

The owner and the Board welcome back a coach with a wealth of top-level experience and success, including his previous spell with the club in 2009 when we lifted the FA Cup.

Mr Abramovich and the Board believe that Guus has what it takes to get the best out of our talented squad.

Guus said: ‘I am excited to return to Stamford Bridge. Chelsea is one of the biggest clubs in the world but is not where it should be at the moment. However, I am sure we can all turn this season around.

‘I am looking forward to working with the players and staff at this great club and especially renewing my wonderful relationship with the Chelsea fans.’

The Dutchman will be at Stamford Bridge for today’s match but Steve Holland will take control of team matters for the game alongside Eddie Newton, who will now take on the role of assistant first-team coach.

Steve has been an important and influential member of the coaching staff since 2009, while Eddie is Chelsea through and through, having served us as a player and a coach, re-joining the club in 2012 and helping us win the Champions League.

Guus took temporary charge of Chelsea in February 2009, losing just one league game as we recovered from a poor first half of the season to finish third in the Premier League, guaranteeing Champions League football for the next campaign and signing off in style thanks to a 2-1 FA Cup win over Everton at Wembley.

That role was combined with being coach of Russia, one of six international posts he has held during a coaching career which has spanned three decades.

Guus’s first managerial job was in his homeland with PSV, a club he had represented during a 15-year playing career. As coach, he lifted three league titles and the European Cup in 1988. Three more followed during a second stint there between 2002 and 2006, with the intervening years seeing him coach in Turkey and Spain as well as lead the Dutch, South Korean and Australian national teams.

As South Korea coach, he led them to a stunning third place at the 2002 World Cup on home soil, one place better than with the Netherlands four years earlier.

Having taken the Russian job in 2006, Guus led them to the semi-finals of Euro 2008 before taking the reins at Chelsea on a temporary basis in early 2009. A 2-1 win at Aston Villa in his first game set the tone for the remainder of the season, and it took a last-minute Andres Iniesta strike on a controversial night to deny the Blues a place in the Champions League final.

Guus’s first stay in west London ended well, however, with the whole of Stamford Bridge singing his name following our final home game of the season and the fans unveiling a huge ‘thank you’ banner at Wembley prior to the FA Cup final, in which we came from behind to win.

Since then, Guus has coached Turkey and the Netherlands, as well as spending 18 months at Anzhi Makhachkala in Russia, where he signed Willian from Shakhtar Donetsk.