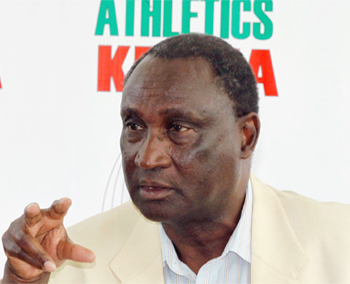 Three top Kenyan athletics officials were suspended on Monday over suspicions they siphoned off sponsorship money from Nike and subverted anti-doping controls.

In the latest hammer-blow to global track and field, the IAAF ethics commission announced the provisional suspension of the Kenyan Athletics Federation president and two other top officials in the “interests of the integrity of the sport”.

The trio were suspended “from any IAAF or Athletics Kenya position pending investigation of complaints made against them and evidence and information which has been received by the IAAF Ethics Commission”.

“This provisional suspension, which is made in the interests of the integrity of the sport, is for a period of 180 days,” the IAAF said in a statement.

The cases warranting investigation, against Kiplagat, Okeyo and Kinyua were twofold, the commission explained.

The first was “in relation to potential subversion of the anti-doping control process in Kenya”.

They also face investigation because they are “accused of potential improper diversion from Athletics Kenya of funds received from Nike”.

“A prima facie case has also been found to exist in respect of Mr Kiplagat in relation to receipt, personally or by Athletics Kenya, of an apparent gift of two motor vehicles from the Qatar Association of Athletics Federation in the period 2014-2015,” it said.

As a coincidence, the Qatari capital of Doha was named in November 2014 as the surprise host city of the 2019 World Athletics Championships.

The Sunday Times newspaper alleged earlier this month that Okeyo, along with two other then-unnamed officials, to have siphoned off $700 000 out of the federation’s bank account from a sponsorship deal between the national association and multinational sportswear giant Nike.

This latest investigation will heap further embarrassment on the IAAF, which has already suspended Russia from all competition after a report commissioned by the World Anti-Doping Agency (WADA) alleged the country had been involved in systemic state-sponsored doping.

That was the start of a rough ride for newly-elected IAAF president Sebastian Coe, whose predecessor Lamine Diack is under French investigation over allegations he accepted bribes to allow doped runners to continue to compete.

Many in Kenya fear doping is rife among their top class athletes too — runners who have been the source of enormous national pride. More than 30 Kenyan athletes have recently been suspended after testing positive for banned performance-enhancing drugs.

Notable among that number was marathon star Rita Jeptoo, while there were two positive tests at this year’s Beijing world championships, where the Kenyan team topped the medals table for the first time since the champs started in 1983, taking seven golds, six silvers and three bronze medals.

WADA has continued to raise concerns over Kenya’s efforts to put into effect its anti-doping measures over the past two years, warning that Kenya could face being ejected from the Olympics unless it showed its seriousness in fighting doping.

For that reason and following the IAAF’s suspension of Russia, the Kenyan government earlier this month announced the immediate establishment of an anti-doping agency with the aim of assuaging concerns over the east African country’s internal anti-doping policy.