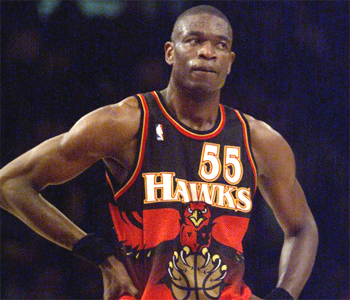 It was an emotional night at Philips Arena in downtown Atlanta when the number 55 jersey was raised to the rafters in celebration of Dikembe Mutombo. A fitting tribute to an NBA legend.

Mutombo was born in the Democratic Republic of the Congo, pursued and fulfilled his dream of playing in the NBA. His achievements have inspired so many on the continent to reach for their own dreams. Now his famous no. 55 jersey has been retired and will hang high above future stars from the African continent when they play in Atlanta.

He might not have known at the time he began his journey in the NBA in 1991 with the Denver Nuggets that he would become an eight-time NBA All-Star and one of the best shot blockers in NBA history. His career took him from the Nuggets to the Atlanta Hawks, Philadelphia 76ers, New Jersey Nets, New York Knicks and finally the Houston Rockets.

Mutombo was taken aback by the appreciation shown to him throughout his career, “Who would have ever thought this son of the Congo would have his number at Philips Arena. Thank you so much.” He was inducted into the Naismith Memorial Basketball Hall of fame in September. His jersey retirement in Atlanta was a joyous occasion as the celebrations took place at halftime of the Atlanta Hawks vs Boston Celtics matchup won by the Hawks on Tuesday.

NBA Commissioner Adam Silver acknowledged the part Mutombo’s played in not just bringing success to the teams he played for but also for the work he’s done off the court as well, “Tonight’s jersey dedication means more than what you accomplished on the court. You’ve done more than any player that I can think of that help their community.”