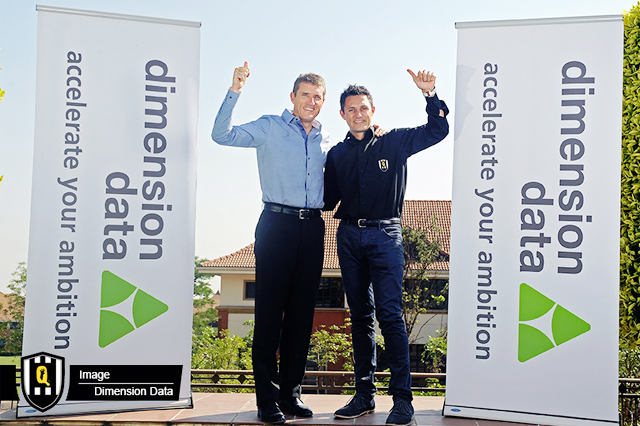 The International Cycling Union (UCI) announced earlier today that our African Team, which will race as Team Dimension Data in 2016 has received a World Tour license for the 2016 season.

It is a historic day in the world of cycling and for the continent of Africa as for the first time, Africa will have a team represented at the highest level of the sport. While we were always hopeful of making it into the World Tour, the excitement of today’s announcement has been met with great joy among our team, partners and fans across the world.

The realisation of this dream has only been made possible by years of hard work, strategic partnerships, incredible riders producing exceptional performances and support staff. We are delighted to rewrite the history books and place African cycling at the highest level in World Cycling. To our partners Dimension Data, Deloitte, Cervélo, Sapinda, Rotor and all the others that have believed in the future of this team thank you for your support in making this a reality. As a World Tour team we believe we will be able to mobilise more people on bicycles through the Qhubeka Charity and our #BicyclesChangeLives campaign.

In addition, we are delighted to announce that we will be registering a UCI Continental in 2016. This team will be based out of our training center in Lucca, Italy and will allow our young, up and coming African riders to race a solid European season.

Douglas Ryder – Team Principal
This is incredible, I am so happy for this team, our partners and all the staff and riders that have worked so hard over the years to keep building this team to push beyond the boundaries and believe that anything is possible. To get this news on our training camp in Cape Town as we are bonding with our new team for the future is simply the best motivation to move forward into 2016.

As the title sponsor, we’re extremely proud to be part of the team’s iconic rise from one of the five wild cards teams to ride in this year’s Tour de France to World Tour status. We look forward to accelerating our journey together and continue to play a role in developing African riders into professional cyclists who will compete in some of the world’s greatest cycling events.