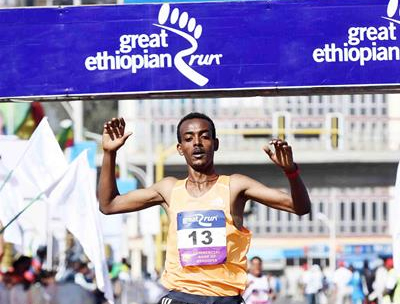 Addis Ababa, Ethiopia – Tamirat Tola ran away from a strong field to win at the 15th Great Ethiopian Run, earning a prestigious victory in one of Africa’s biggest road races on Sunday.

Adugna Takele, a club mate of Tola, was third in 28:55. Takele, it should be noted, ran 27:19.34 last summer to demonstrate the calibre of athletes racing in Addis Ababa on Sunday.

The women’s race saw Mamitu Daska, 32, put almost a minute between herself and her nearest rivals before crossing the line in 32:16. She broke clear just after the halfway point and continued to extend her lead over the uphill second half of the course.