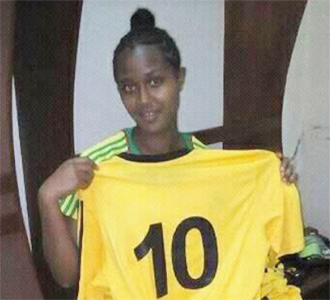 She was the only female player in the town of Durame of Southern Region State when she started playing football at the age of just six.

Her love for football grew with her as she took part in school teams and gained two years training in a youth project. The highlight of her early football career came four years ago when she was named best female player during the All Ethiopian Games held in Adama City in which she scored seven goals representing SNNP region. In 2012, she started her club football for Hawassa City, where she also received her secondary education, before moving on to join Dedebit FC two years later. Whatever the competition, Loza Abera, 19, puts her name into the top goal scorers’ chart. She is currently the top goal scorer in the U20 Women World Cup Qualifiers with six goals. Dawit Tolesa of The Reporter sat down with Loza for this exclusive coverage. Excerpts:

The Reporter: You have already achieved some success in your early football career. But what motivated you to become a footballer?

Loza Abera: I have always had a big dream of becoming a footballer since childhood but I never thought that I will reach to the level I am right now. We were allowed to focus only on our education in the community I grew up. I used to focus more on my academic life. But I was drawn to football thanks to the sports fields in my neighborhood. But the love I have for football is the main reason. I also believe God has a plan for me.

One thought on “Loza Abera, the promising goal prodigy”