It is written that man shall not live by bread alone but bread and a beverage, well, that could be a pleasant meal for a hungry person; for lovers of beer, that would be the beverage of choice. Water of course would be the healthiest choice, many people like milk,bunna ena dabo is a favourite, and lovers of Coca Cola would automatically reach for a coke. However, in terms of free market competition, if Fortune were to name the year that we are leaving behind, Year of the Beer would be among the top contenders.

With the numerous brands that have been available to beer drinkers over the years, it would be forgivable to think the market was saturated, but that does not seem to be so. As Fortune Staff Writer, Hidat Arkebe wrote in the story Dashen Brewery to Begin Production at Two Billion Birr Plant (Vol 16, No. 798   August 2015), this second plant will increase the annual beer supply by two to three million hectolitres. At the time of writing, the latest beer on the block, Habesha has a most visible presence in the city. The headline of Vol.16 No. 796 Habesha Beer Enters Market with Production Capacity of 650,000hl placed Habesha as the ninth brewery in Ethiopia with heavyweight Bavaria among its shareholders. 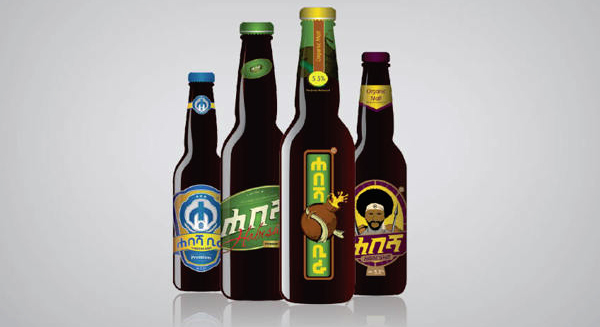 Habesha Breweries S.C. has just held its fourth Ordinary Shareholders Meeting and elected a new Board of Directors, the composition of which reflects its relationship with Bavaria Overseas Breweries. Habesha’s products are now available within a 600Km radius from Addis Abeba and at 198 Br a crate, same as the distribution price of all other regular brands.

Heineken Group, the world’s largest brewery which entered the Ethiopian market in 2011, with a 200 million dollar investment, inaugurated its plant in Addis Abeba in January 2015. During its press conference, Heineken’s President for Africa and the Middle East, Siep Hiemstra, indicated that the company would begin producing Heineken beer next year. One of Heineken’s babies, Walia, is also the name of Ethiopia’s national football team and so the beer is an almost automatic (and quite strategic) sponsor. Walia beer is currently in the Seychelles with the team and having announced that it would be taking along the 200 winners of its bottle crown contest.

Raya Breweries in Vol. 15 No. 749 Sep. 7, 2014 invited bidders to supply draught beer kegs and dispensing accessories, thereby giving a glimpse at support industries of the beverage sector. In the following issue – the New Year’s issue dated Sep. 14, 2014 Walia Beer’s Happy Ethiopian New Year advertisement displays its bottle showing the yellow adeyAbeba flowers associated with the New Year and the shy but wild long-horned animal after which the team is named. That New Year issue also carried ads for Meta Beer whose symbol is the lion and Amber Beer with the iconic label of St. Giorgis slaying the dragon. However, Walia’s ad clearly displayed this very important message; “Drink responsibly – not for sale to persons under the age of 18.” And that advice is offered to all those Drinking in the New Year.