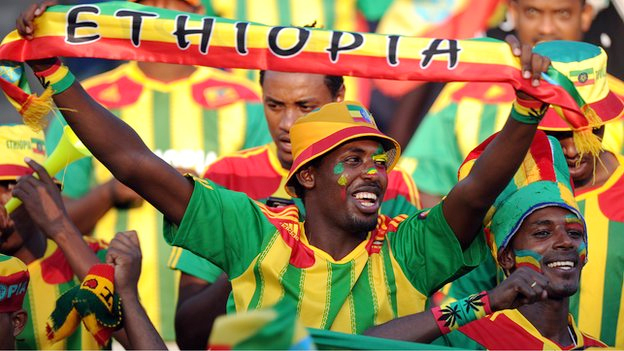 The largest ever contingent of foreign football supporters will be arriving on Friday and leaving on Sunday to support their team in their game against Seychelles. Ethiopian Airlines believes that sports can be used to market the destination.

The Ethiopian national team will travel here to meet our national team in the 2017 Africa Cup of Nations qualifier first round match on Saturday. The players arrived in Seychelles on Wednesday afternoon ahead of a game they will want to win convincingly in front of their fervent supporters.
Half of the 400 fans expected to attend the game will be travelling to Seychelles courtesy of Heineken who chartered an entire Dreamliner especially for the occasion. As part of the launch of its new Walia beer, the company organised a competition rewarding winners with an all-expense-paid two-day trip to Seychelles. The remaining 200 fans availed themselves of a special buy one get one free promotion advertised by Ethiopian Airlines in Ethiopian media outlets. The airline intends to extend a similar offer to Seychellois fans for the return game in Addis Ababa in September 2016.

Given their numbers, the supporters will be residing in several hotels, including the Savoy Resort, Coral Strand and Berjaya Beau Vallon. Indeed, perhaps the most significant news about this match is that the visitors will be travelling with the largest group of foreign supporters that has ever come over for such a match: more than 400 supporters are expected to flood the Unity Stadium to cheer their team to victory.

The Ethiopian Airline Area Manager, Meseret Tekalign, who spoke to TODAY Sports this week, believes that such sporting events can be a useful tool for marketing the destination. “The football game is almost an excuse to help raise awareness about Seychelles as a tourist destination”, she explained.

That said, she is adamant that the football fans are travelling with one objective in mind. “Our supporters are coming here with the sole objective of winning this match. We plan to steer our team to a victory with our support. In fact, there are two flights carrying the supporters – one is the regular Dreamliner flight whilst the other is a chartered flight which is fully booked. Both flights are arriving on Friday and will leave on Sunday. We are 100% here to win this encounter,” Mrs Meseret told TODAY Sports.

On the purely football side of things, the Ethiopian team coach Yohannes Sahle, who was coach of Dedebit who beat Cote D’Or in the CAF cup competition early this year, took over in the role in April 2015 replacing Portuguese Mariano Barretto. He will be desperate for a win especially after losing a friendly match last weekend to Rwanda 3-1.

Known as the Walias, the team wants to collect maximum points before they face Group J leaders Algeria. Both teams have six points after two matches with Ethiopia defeating Lesotho 2-1 in their opening match in Addis Ababa. Walia, the major sponsor of the team, is therefore offering all the travelling fans air tickets and accommodation after they won a lottery which involved purchasing bottles of Walia beer.

The Ethiopian Airlines area manager added that it is also an honour for two of their Dreamliners to transport the national team and its fans to Seychelles, which is regarded as a world leader in sustainable eco-tourism attracting tens of thousands of visitors every year. “Ethiopian Airlines has always been a proud carrier of Ethiopian athletes and the national team to wherever they travel around the world for sporting tournaments. I hope that the Walias and their fans coming to Seychelles will have a spectacular two-day stay in the Paradise of Earth”.

One thought on “Seychelles to welcome 400 Ethiopian fans”