Ethiopian Airlines last week announced that it had exceeded its profits target for 2014.

The airline posted a $175 million profit last year, exceeding its revenue targets, and dwarfing its main African competitors in Kenya and South Africa, who have posted losses and are sinking in debt.

Its passenger numbers grew from 5.2 million to more than six million passengers in 2014, aided by lower fares and strong inter-continental routes, especially to Kenya, South Africa and Nigeria.

It now plans to double its fleet from the current 77 to 140 by 2025 as it positions itself to be Africa’s largest carrier.

While other major African airlines, including Kenya Airways and South African Airways, slid into loss, Ethiopian Airlines has grown its revenue and expanded its routes to become the most networked carrier on the continent.

The Kenyan airline has seen its losses grow by more than 600 per cent from the $28.9 million loss it posted in 2014, pushing its cumulative losses in the past three years to $442 million. 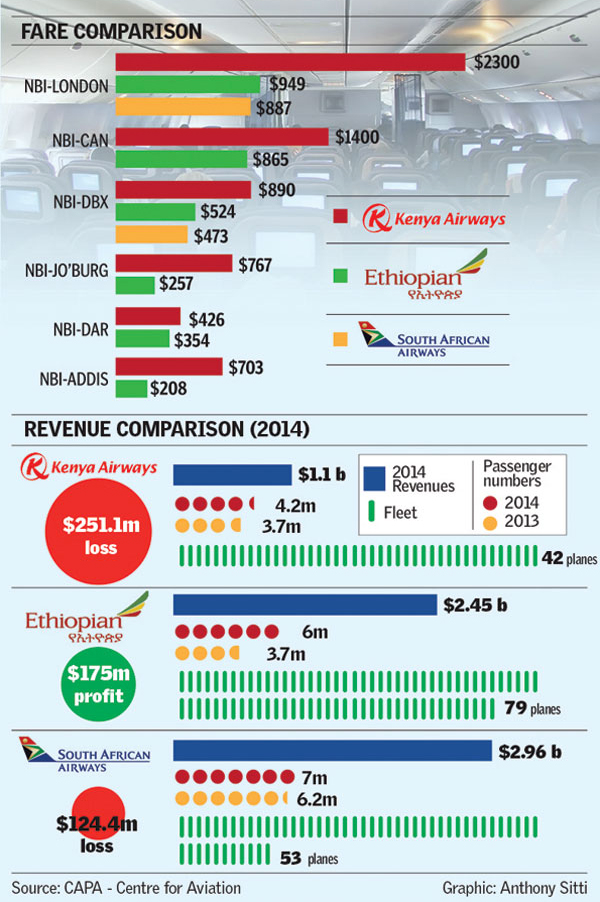 According to the International Air Transport Industry Association, African airlines are expected to see the slowest growth among developing markets with a capacity and demand expansion of 3.3 per cent and 3.2 per cent respectively this year