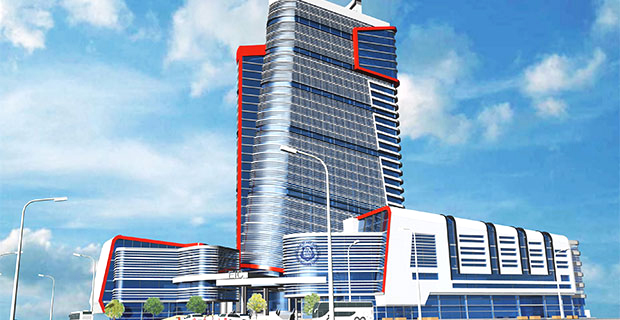 EIC’s headquarters will be a 38-storey building which will be constructed on 8,477sqm of land out of a total of 12,211sqm of land on Ras Damtew Street, opposite Ambassador Theatre. The building will have a four-storey basement. The remaining plot will be reserved for parking.

The company already had a 3,400sqm plot of land along Gordeme River, which had been used as a store. The company leased an additional 1,300sqm of land in 2005/06 for 1,800 Br a square metre in order to erect 15-storey building for its life insurance office at that site. It then changed its plan into a 38-floor building, with four floors underground and the rest above, according to Haileluel Tessema, deputy CEO of EIC’s Resource Management Office. For that it leased an additional 8,000sqm for the price of 2,500 Br a square metre in 2011.

Rising to a height of 113m, the new building will accommodate offices of EIC and avail extra space for rent for other commercial purposes, said Fikiru Tsegaye, director of Marketing & Strategic Management at EIC.

EIC had received offers from 21 consulting firms for the architectural design in 2012. In June 2015, it approved the design. MH Engineering, will be contracted for the design, as well as contract administration and supervision this Monday.

MH has agreed to deliver the detailed design within six months. The design will include electrical and sanitation plans. It will also determine the exact contract period and cost of the building. After dealing with all this MH will prepare the bidding document for the construction of the building and will select the winner within two months.

It is estimated that the construction will take four years and 2.2 billion Br.

Established in 1997, MH has done architectural designs for Adey Abeba Stadium, in front of the former Imperial Hotel at the Bole-Megenagna ring road, as well as the Nekemt and Hawassa stadiums, and designing 13 universities throughout the country. It has also designed the headquarters for the Ethiopia Electrical Power headquarters.

Established in 1976, EIC is the only state-owned and the largest insurance company in Ethiopia. It was reestablished with 61 million Br paid up capital as a public enterprise under Proclamation 201/1994.

According to its six-month report in January 2015, it has registered 383 million Br of paid up capital, while 209 million Br is expected to be paid fully within the coming three years.

As per recent revision, the location selected for EIC’s headquarters belongs to Zone One  Division of the city’s Master Plan which permits developers to build up to 52-storey buildings.

This area is dominated by financial institutions such as Awash Bank and Insurance companies, which have already completed their buildings. Others, including the buildings of United Bank S.C., Cooperative Bank of Oromia S.C, Commercial Bank of Ethiopia, Nib International Bank S.C along with Nib Insurance Company, Dashen Bank S.C. and Wegagen Bank S.C are already in progress.