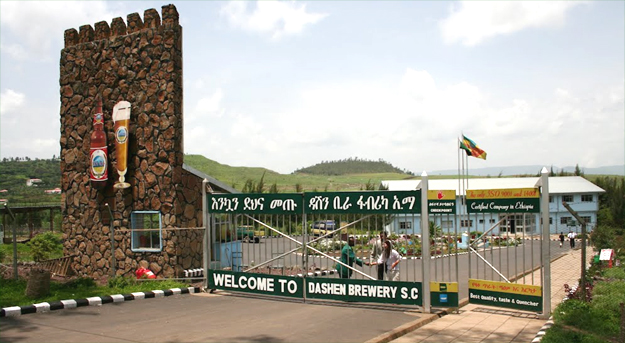 The plant will produce two million hectolitres in its first year and three million hectolitres after that, according to Dessalegn Mekonnen, project manager. The new factory is producing the same quality of beer as Dashen’s first plant in Gonder with the same packaging and 4.5pc of alcohol.

It was expected to take 2.6 billion Br, but the whole plant, including the building and machinery, was completed for just two billion Birr, according to Dessalegn Mekonnen, the project manager. The new factory rests on 12ha plot of land in the town, which is located in North Shoa Zone of Amhara Region, 130Km northeast of Addis Abeba.

Production will begin in the next few days, says Dessalegn.

Dashen’s first plant produces 900,000hl but the company needed to build another factory, because the existing production could not meet the demand.

The company chose Debre Birhan because of the barley it grows and its proximity to Addis Abeba, Dessalegn explained. From there Dashen wants to distribute its beer country-wide.

Dashen Brewery is owned by Tiret Corporate, which has 49pc share, and Duet Group, a UK investment company, which owns the majority 51pc. The company was established in 2000, selling the majority share to Duet in 2012.

Duet is a global alternative asset manager founded in 2002 with over 2.4 billion dollars of equity under management as of January 2011 across its hedge funds and real estate and infrastructure investments. It has 73 professionals working in London, New York, Tokyo, Singapore, New Delhi, Dubai and Istanbul.

TIRET Corporate was established as an endowment organisation in 1995 in Bahir Dar, Ethiopia with an initial capital reserve of 26,113,813 Br, contributed by the Amhara National Democratic Movement (ANDM) and its 25 founding members. TIRET’s head office is located in Bahir Dar city, Amhara Region. It also has a liaison office in Addis Abeba. Though in this instance TIRET’s interest is in beer, its plans to diversify include the establishment of a flour company.

Dashen’s new brewery has received 18 machines from 12 different suppliers, Dessalegn says. The construction work was undertaken by Elmi Olindo Contractors Plc which is an Ethiopian-based company formed in 1937; the consultants were MH Engineering Consultancy and PTS.

Its new plant will hire 500 permanent and 1,000 temporary workers.

Ethiopia’s per capita consumption of beer stands at eight litres and is expected to reach nine or 10 by the end of 2015/16. Current national beer production stands at 10.5 million hectolitres, that is produced by the nine beer companies in Ethiopia, as Akililu Kefyalew, director of Beverage Processing Industries at the Ministry of Industry said.